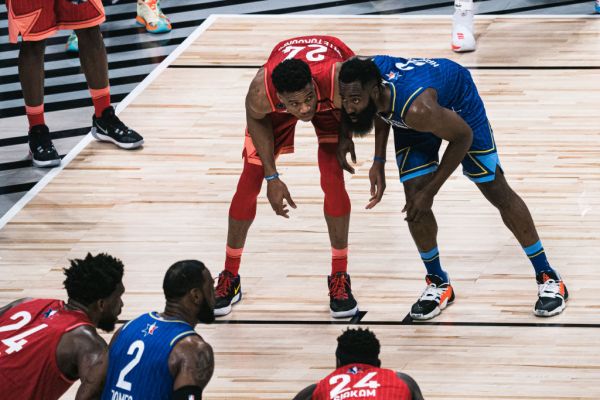 It appears that a feud between two of the NBA’s top stars is brewing between the pair of MVP candidates in James Harden and Giannis Antetokounmpo. With the second half of the season underway with The Beard and the Greek Freak doing their best to bring their respective teams to glory, the two have traded public jabs with NBA Twitter reacting in kind.

Antetokounmpo took the first shot during the NBA All-Star game selection, egged on by Charles Barkley. The Milwaukee Bucks superstar selected Boston Celtics star Kemba Walker to join his All-Star team over Harden after Chuck called Harden a “dribbler” which got a laugh. But it was Antetokounmpo saying that he wanted “somebody that’s going to pass the ball” that got a rise out of Harden.

Harden sat down for an exclusive interview with EPSN and Rachel Nichols, responding to the shot by saying, “I wish I could just run and be 7 feet and just dunk. Like that takes no skill at all,” Harden said. “I gotta actually learn how to play basketball, how to have skill. I take that any day.”

On top of that, the idea that Walker shares the ball more than Harden got shot down as the Houston Rockets star averages more dimes per game. Can’t deny those facts. The fact remains that as league superstars, but players get a lot of favorable treatment from officials according to fans and for whatever reason, basketball fans love picking apart Harden’s game despite his obvious talent.

It isn’t known if Giannis has fired back a shot yet but the chatter on Twitter has been ongoing all day and we’ve got those comments listed below.