The hype and anticipation for a couple major 2019 movies just went up a few notches. On Monday, new must-see posters for the upcoming Godzilla: King of the Monsters and Sonic the Hedgehog premiered online.

This is going to be such a movie.. literally! #GodzillaKingOfTheMonsters pic.twitter.com/dorj5teN66

Bethesda, the company behind the uber-popular post-apocalyptic RPG franchise Fallout probably wants to hit the reset button when it comes to its latest game Fallout 76.

Some customers submitting tickets for replacement Fallout 76 themed canvas bags have been given access areas of Bethesda’s support system, the ability to open and close tickets and access to customers personal information like addresses and phone numbers. A Twitter user who goes by the handle @JesscaTracy9 shared an image of how it looked once given access.

@BethesdaSupport I am receiving other people’s support tickets on my @bethesda account. I have numerous people receipts for power armor set that includes their email & home address and the type of card used. This is not good, right? #Fallout76 pic.twitter.com/KUpGCNfIF0

“I am receiving every single one of your support tickets on my Bethesda account. Mostly it’s your receipts for you power armor set requesting a new bag. These receipts contain all your info. Your email and home address and the card you used to buy this extremely glitched game.”

“I went on the support website today, to update a ticket of mine, and surprisingly (or not…) I ended up being able to see all sorts of tickets, with people putting their personal information in them, like receipt screenshots, names, addresses and so on.”

Bethesda fixed the issue swiftly, and a community manager for the company responded by just saying “Hi guys, we’ve resolved this issue.” Fallout 76 was one the of the years most anticipated titles but launched with severe issues and is being greeted with some lackluster reviews from critics as well as players.

This latest issue adds to the list of things wrong with the game and it’s rollout. Bethesda still has time to work on the game and salvage it with some much-needed updates. 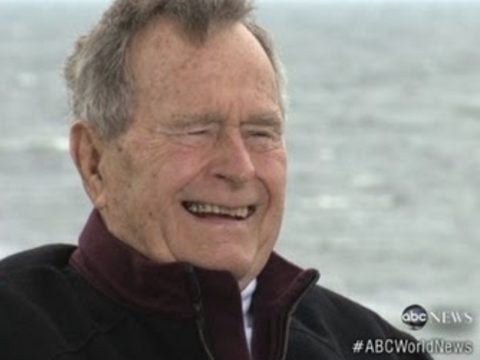 Former president George H.W. Bush has died at the age of 94. Months after losing his longtime wife, the 41st head of state has lost his life.

According to reports, the late ex-president died Friday (November 30) night shortly before midnight.

Mr. Bush had a form of Parkinson’s disease that forced him to use a wheelchair or motorized scooter in recent years, and he had been in and out of hospitals during that time as his health declined. In April, a day after attending Mrs. Bush’s funeral, he was treated for an infection that had spread to his blood. In 2013, he was in dire enough shape with bronchitis that former President George W. Bush, his son, solicited ideas for a eulogy. (New York Times)

Jeb, Neil, Marvin, Doro, and I are saddened to announce that after 94 remarkable years, our dear Dad has died. George H. W. Bush was a man of the highest character and the best dad a son or daughter could ask for. The entire Bush family is deeply grateful for 41’s life and love, for the compassion of those who have cared and prayed for Dad, and for the condolences of our friends and fellow citizens.

Back in April, Bush lost his longtime wife Barbara Bush after over 70 years of marriage.

His death comes just eight months after his beloved wife Barbara died on April 17. The pair met as teenagers, and their “storybook” marriage lasted 73 years. Even after her death, the lifelong Republican remained devoted to his bride, sitting beside her casket for hours in his wheelchair as mourners paid their respects while she lay in repose one day before her invitation-only funeral. (People)

Bush is most known for his one-term as president in the 90’s and being the father of George W. Bush.

George H.W. Bush, the 41st president of the United States and the father of the 43rd, was a steadfast force on the international stage for decades, from his stint as an envoy to Beijing to his eight years as vice president and his one term as commander in chief from 1989 to 1993. The last veteran of World War II to serve as president, he was a consummate public servant and a statesman who helped guide the nation and the world out of a four-decade Cold War that had carried the threat of nuclear annihilation. (Washington Post)