Apparently the H-Town Hottie lost her cool when she found out that her ex-boyfriend cheated on her and had a baby with a woman he claimed he only slept with once. To make matters worse, she found out at SXSW.

“At the damn concert!” she exclaimed. “Like, what a way for a bitch to find out your n—a cheated on you and had a baby … I was so mad, and you gotta know, my temper is bad.”

In true Aquarius fashion, Meg claims she tried to keep calm when she spotted them in public but he kept “pulling and pushing her.” She admitted the situation was “fun” at the time but toxic.

“It was toxic. It was fun at the time, but it was very toxic. But I was young and I thought that toxic s—t was cute, but it’s not! Do not let a n—a put hands on you, and don’t put your hands on no n—a … I was really trying to keep the peace, keep it player, because we in a public environment.”

But her then-boyfriend who stood 6’9″ smashed her phone and they started fighting in public. A nearby witness called the cops and they arrived when Meg popped off. “When I was ready to give it to him, the motherf—king police pull up when I’m punching … now the police are here and I look like the aggressor.” 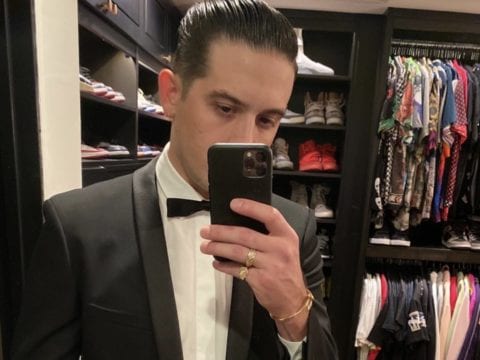 Big Facts: In a new interview, Eazy quickly shut down the dating hype and admitted Meg is nothing more than a pal.

High-Key Details: The denial comes after G-Eazy made headlines for flooding Meg’s body with tons of kisses in a publicized video.

Wait, There’s More: Prior to his denial, Meg went to Twitter to dead any possibilities of the pair being a romantic orbit.

Before You Go: Outside of the romance buzz, Eazy recently released his Tory Lanez and Tyga-featured “Still Be Friends” single. 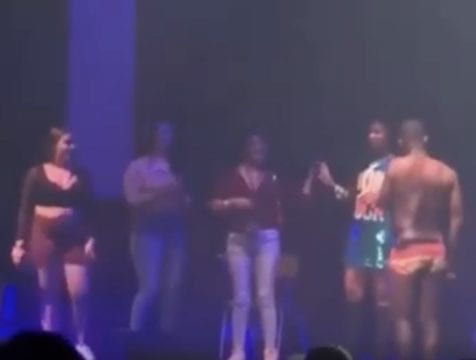 The hip-hop is filled with endless visual gems. Today, check out footage of Young Dolph kicking a twerking man off his stage, Azealia Banks fearing for her life, Megan Thee Stallion receiving a huge Snoop Dogg co-sign and more. Watch and comment below! 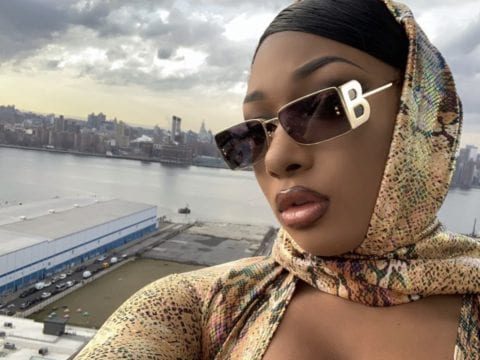 Texas hip-hop star Megan Thee Stallion is showing just how beautiful the Big Apple is this winter. The rap heavyweight went online this weekend with a slideshow of pics showing off New York City’s skyline. Look and swipe below! 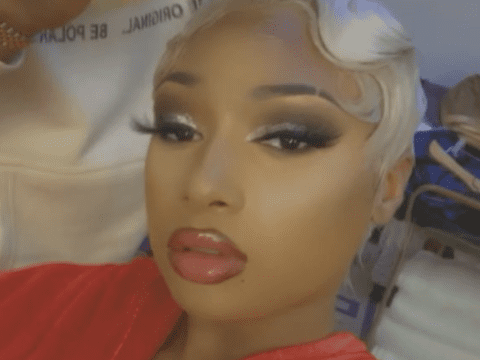 Texas rap star Megan Thee Stallion is keeping her social media feeds pumping right now. The hip-hop diva has come through with a batch of new content showing off a fresh look.

High-Key Details: Heading into the weekend, Meg hit up Instagram with a must-see all-pink hairstyle reveal.

Wait, There’s More: Earlier in the week, Meg jumped online with a must-like shot of herself flexing all-red everything vibes.

Before You Go: This week, Thee Stallion reacted to her new “B.I.T.C.H” single landing on the Billboard Hot 100 chart.

The post Megan Thee Stallion Changes Her Look Into Amber Rose-Type Blonde Hair: “You Need A Real One In Ya Life” appeared first on . 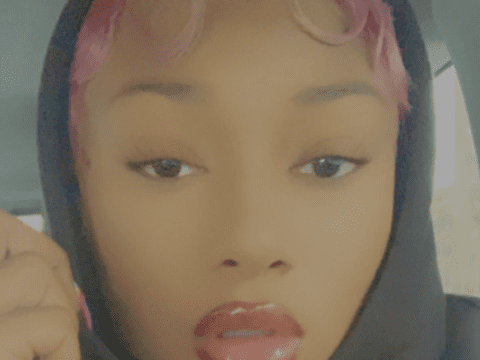 Texas rap star Megan Thee Stallion stays stacking up likes. The hip-hop diva has shared a new pic of herself showing off a revamped and colorful af look.

Big Facts: Heading into the weekend, Meg hit up Instagram with the must-see all-pink reveal.

High-Key Details: Heading into Friday, Meg jumped online with a must-like shot of herself flexing all-red everything vibes.

Before You Go: This week, Meg went online with shots of herself chilling with music mogul Diddy. 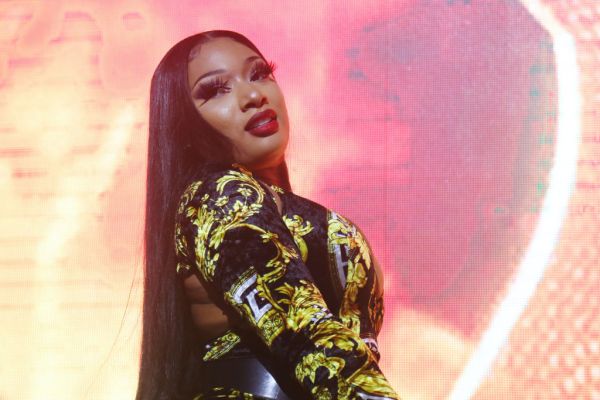 Rest easy, Hotties, your fave Megan Thee Stallion is still single and ready to mingle. After setting the Internet on fire with a steamy video featuring fellow rapper G-Eazy, Hot Girl Meg says that the Bay Area bad boy isn’t getting his hands inside her cookie jar.

It was a wild Super Bowl Weekend in Miami that saw the Kansas City Chiefs win big over the San Francisco 49ers but what fans across the globe took notice of was Young Gerald sucking the face of Tina Snow while laying down in a bed. While most folks assumed that it was all for show, Black Twitter was completely verklempt over the slight possibility of a hookup between Eazy and Thee Stallion.

Now that the dust has settled and the slander piled high, Megan took to Twitter to let her adoring public know that she and G-Eazy are just homies.

“Lol alright nowww y’all got all y’all jokes out but I am not f*cking G Eazy,” Megan tweeted early Tuesday morning (Feb. 4).

Because Twitter is the kind of place it is, the jokes and disapproval are still raining down on G-Eazy’s dome piece with Megan catching some stray shots in the process.

Adding to all this “drama” is a pretty weighty accusation levied by G-Eazy’s ex, Halsey, who wrote in an Instagram comment that her former boyfriend was allegedly abusive. She didn’t clarify the statement but the singer has apparently grown tired of fans sniping at her regarding her ex and his actions, and she was seen on video yelling at a fan who kept screaming his name like a jerk over the weekend as well.

Check out the reactions to Megan Thee Stallion saving Black History Month by not swirling with G-Eazy below.

Lol alright nowww y’all got all y’all jokes out

but I am not fucking G Eazy.

Megan Thee Stallion and G-Eazy had the Internet in a frenzy when a video surfaced of them getting extra cozy.

But Megan Thee Stallion cleared the air this morning on Twitter. “Lol alright nowww y’all got all y’all jokes out but I am not f*cking G Eazy,” she tweeted.

One of the hotties questioned, “so why was he sucking the makeup off ur right cheek like that hottie?” To which Meg hilariously replied, “He like fenty.”

G-Eazy’s girlfriend, Yasmin Wijnaldum, responded to the steamy videos with a cryptic message. The couple’s pictures are still uploaded to the model’s Instagram page so it’s safe to assume they’re still together and going to work it out.

Megan Thee Stallion looks to have secured her Valentine’s in rapper G-Eazy. The Hot Girl was spotted on the Oakland rapper’s Instagram story cuddled up with him laying kisses on her.

All good, right? Nah. Fans of Meg and social media, in general, appear to not be here for the combination with jokes and confusion hitting the video as opposed to congratulatory messages on their love.

After that video hit….. the tweets followed rapidly.

Do you think the sparks between the two are real or just a moment of viral fun?

The post Megan Thee Stallion and G-Eazy Viral Video Prompts Questions and Jokes About Their Potential Relationship appeared first on The Source. 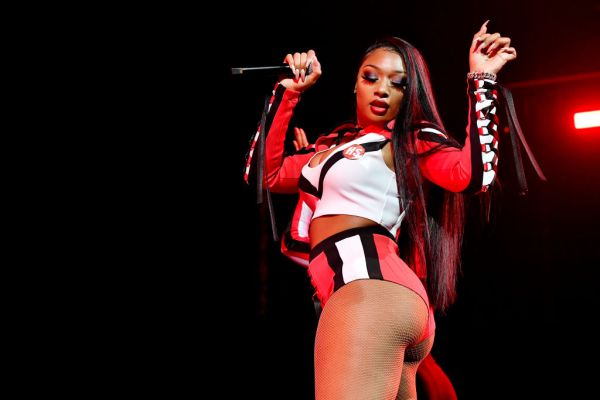 The Hotties and hopefuls don’t seem too pleased to be waking up Monday morning (Feb. 3) to a video of G-Eazy passionately kissing and sucking on the neck of Megan Thee Stallion. As a result, Black Twitter has reacted to the clip in a variety of ways while wondering if there’s something going on between the two rap stars.

The clip in question was shared by the @stelladesanta, which kicked off a Twitter thread of clips and images relating to Young Gerald and Hot Girl Meg while also connecting all this to G-Eazy’s ex, Halsey. The video came from G-Eazy’s Instagram Live and was thought to be taken in Miami during the Super Bowl LIV weekend festivities.

The thread continued with a screencap of Megan’s latest Instagram photo and the comments between her and G-Eazy. Then it continues with a video of Halsey at a concert, also in Miami, blasting a fan who apparently screamed out her ex-boyfriend’s name in the crowd with the singer threatening to throw that fan out.

Her former relationship with the Oakland rapper has been something of a sore spot and she took to Instagram to voice her displeasure at fans who have been sniping at her about her ex, prompting her to also frame the relationship as “abusive.”

Adding to the madness, a clip of G-Eazy and Megan Thee Stallion dancing to Halsey’s song “Closer” inside an unnamed club.

With the footage out there for the world to see, the Hotties don’t seem too thrilled at the prospect of Megan Thee Stallion and G-Eazy potentially being a couple. Again, it could all just be playful drunken hijinks but the Internet has assumed much without much evidence.

We’ve got those reactions listed out below.