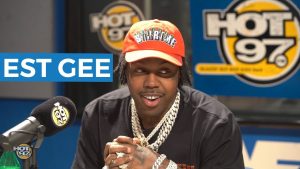 EST Gee is blowing up right now and members of the Hip-Hop community take notice. That community includes JAY-Z, who reached out to the young star but also told him to leave his ghostwriter at the crib.

“Jay-Z a street nigga, he just got a billion,” Gee said. “He just on some cool shit, but he ain’t on no weird shit. JAY-Z ain’t weird at all. And I’ve done met some rappers who be weird bruh, and they supposed to be more younger, gangsta, whatever.”

Gee would reveal Hov extended an offer to slide to the Super Bowl and hang out with him, also saying they can hit the studio.

“He gon’ shoot a joke at you and everything. He told me, ‘Let me bring you down to the Super Bowl with me so we can kick it, man.’ He’s like, ‘We get in the studio, make sure you don’t bring your ghostwriter with you.’ I’m like, ‘Damn.’ He’s like, ‘Yeah man, they told me you have somebody write that shit for you.’ He was dead serious about it. That’s how I know he’s a street nigga who made it down to the big level.”

EST Gee just dropped his new Bigger Than Life or Death album, bringing in Yo Gotti, Lil Durk, Lil Baby, Pooh Shiesty, 42 Dugg, and more. You can check it out below.

The post EST Gee Recalls Meeting with JAY-Z Who Told Him “Don’t Bring Your Ghostwriter” appeared first on The Source. 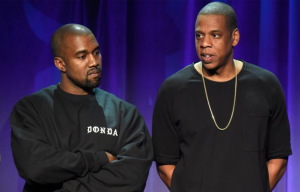 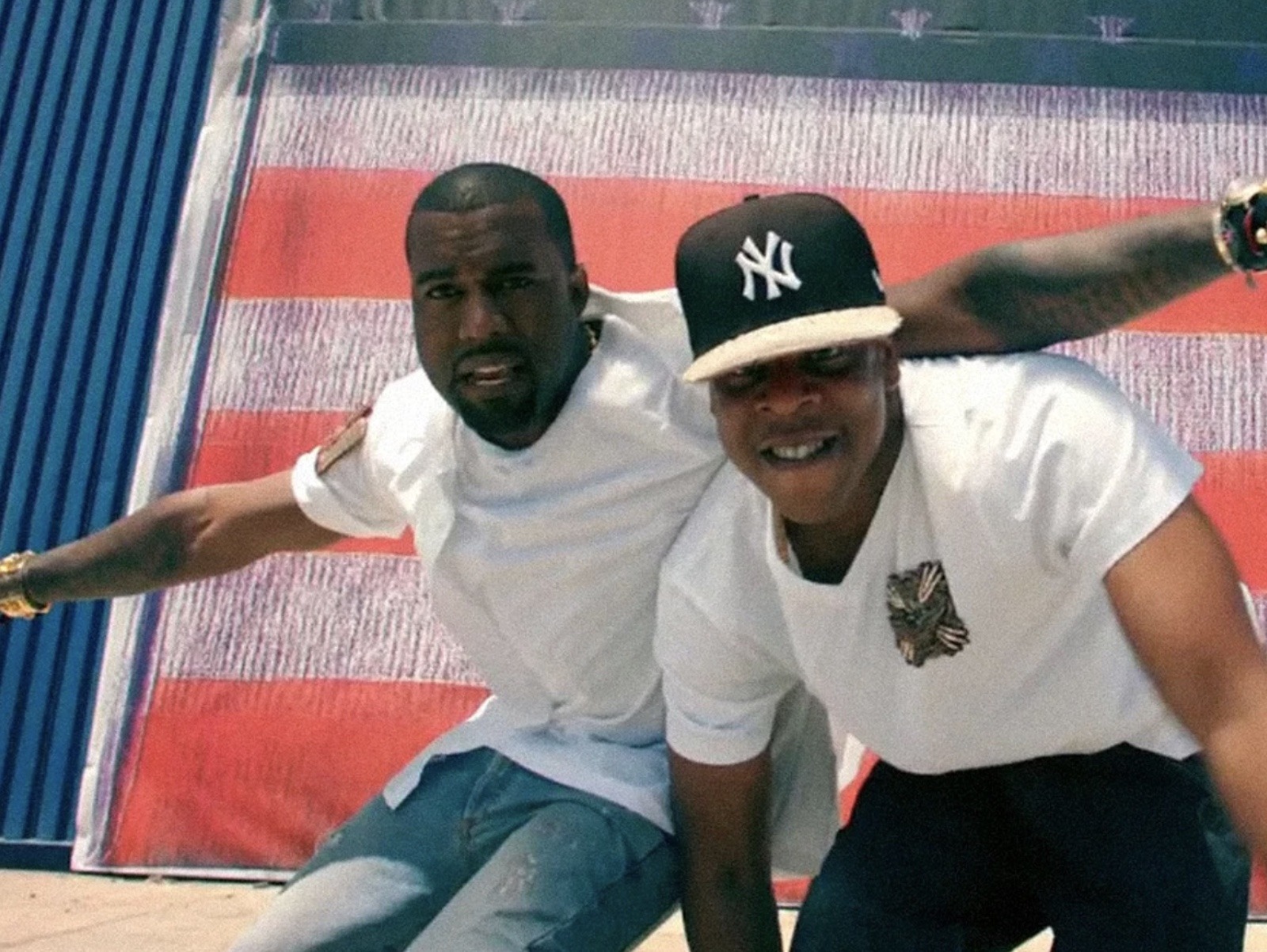 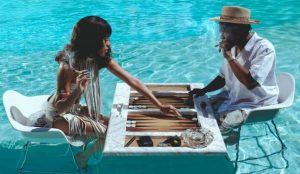 Three months ago, Jay-Z aka Hov’s cannabis line Monogram displayed the first installment of “The Good Life, Redefined”—a lavish campaign inspired by Slim Aarons and shot by Hype Williams. Now some of those images from the photoshoot are available for purchase.

Jay-Z is branding his line of marijuana as high-class cannabis, and the mid-century luxury-inspired photoshoot by Aarons fulfilled Hov’s vision.

This shoot, which included some iconic figures in fashion, entertainment, and the food industry, took place at Twin Palms, Frank Sinatra’s estate in Palm Springs.

“The perception around cannabis has shifted a lot since the 20th century. If you were to ask me and my peers how we’d define the good life today, weed would definitely be a part of it,” Williams said in a statement. “Whether we’re smoking to inspire creativity or to celebrate an achievement, cannabis has a rightful place in modern day culture.”

Starting today, limited-edition prints of the photographs (just 10 of each were produced, for a total of 80) will be available for purchase on The Webster and Caliva.com.

During the 1950’s, Slim Aarons photos became popular for his use of celebrities and glamorous people in various indulgent social settings. His POV was usually “attractive people, doing attractive things in attractive places,” he famously said.

Have you ever splurged on limited artwork? Share your thoughts below.

The post Images Inspired By Slim Aarons From Jay-Z Cannabis Line Now For Sale appeared first on The Source. 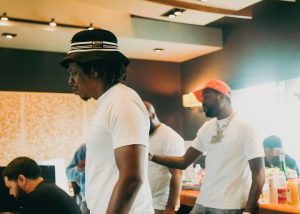 Meek Mill is on the list of rappers who can call JAY-Z and seemingly get a verse at any moment. After appearing on the stellar “What’s Free” back in 2018, it appears Hov is back in the lab cooking up some more with the leader of the Dreamcahsers.

Following their Hamptons hangout, Meek shared a picture of the two in the studio.

“If I ain’t him it’s one of my guys if You the richest In the room you in the wrong room goat talk wit some billionaires I’ll be there soon,” Meek Mill wrote on Instagram.

Recently, JAY-Z, Meek Mill, Philadelphia 76ers owner Michael Rubin, and more all went in on a Baby Blue Bentley that Kraft had eyed but could not get his hands on. “Happy 80th Birthday Robert Kraft,” the accompanying card reads. “Except you look 40 and act 25.”

You can check out that here.

The post Meek Mill and JAY-Z Link For an NYC Studio Session appeared first on The Source. 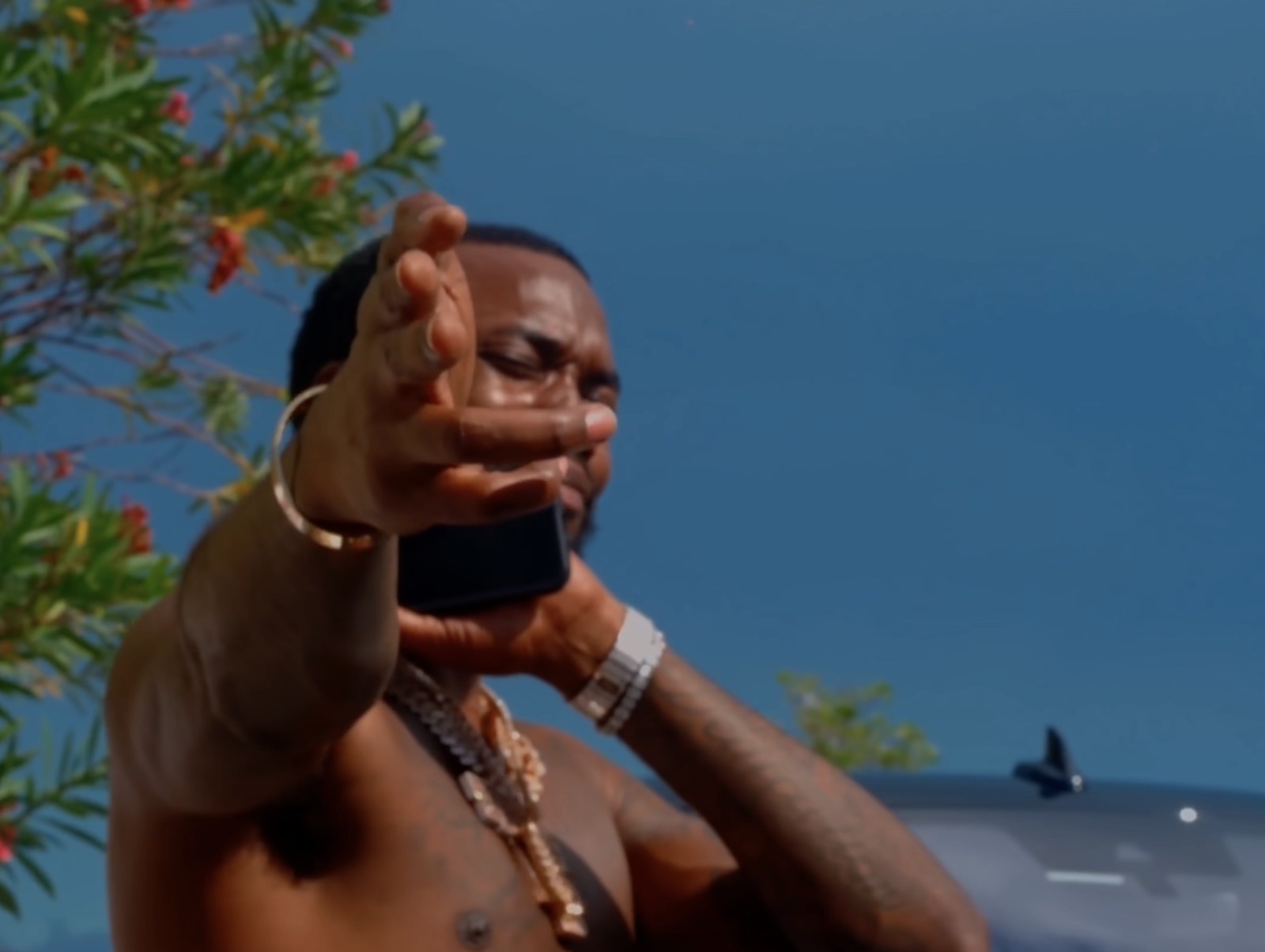 Music mogul JAY-Z and Meek Mill just don’t hang out at billionaires’ all-white parties. Instead, the hip-hop pair have a close-knit bond and look like they could quietly have some tunes brewing. JAY-Z + Meek Mill Look Primed To Drop Heat Meek hit up his Instagram page with a couple snapshots of himself alongside the […] 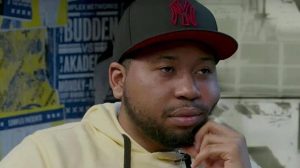 DJ Akademiks continues to stand behind his stance of Drake’s GOAT status. It’s not like The Boy needed anyone to do so after his decade of dominance. His run as the Rap GOAT and one of music’s biggest superstars was iced with his recent award as Billboard’s Artist of the Decade.

While we all await the arrival of his 6th studio album (10th project overall), the conversation of “the greatest rapper ever” has grown more steam. Back in February, Funk Flex stated that Drake holds the crowns, barring the Quentin Miller reference tracks.

Referring tracks or not, DJ Akademiks states that Drake is the greatest rapper. The media personality recently sat down with Andrew Schulz and Akaash Singh on Flagrant 2. The trio discussed Drake’s undeniable dominance as an artist and music businessman.

Akademiks went on to break down his reasoning for Drake’s GOAT status. When most Hip-Hop connoisseurs think of Rap GOAT, they automatically give the nod to Jay-Z. While Hov’s consistent longevity and talent are incomparable, Drake’s career matches that peerless energy as well.

Some might even give the OVO honcho the edge. Akademiks breaks down why he gives the “What’s Next” rapper the nod over Hov.

He continues with Drake’s selfless nature with his stimulus package of doing songs with other artists.

“I think what we’re looking at with Drake, is we give him props for helping other artists, but that artist could have competed with you at some point,” Akademiks says.

“There’s a point, where if you go back to 2015, when Future was so hot. Maybe Future could have toppled Drake. But Drake pretty much overshadowed his wave. Travis. I think Baby to a certain extent. Charlamagne said that aather bout Baby. I don’t thinke Baby’s the guy yet. But I think Drake is smart. Drake won’t ever make it lines in the sand. He’ll always collaborate, help, and have those moments with that person knowing he’ll outlast them.”

He even compares him to Floyd Mayweather.

Peep the full conversation below. The interview gets better as AK sips more Henny.

The post DJ Akademiks Compares Drake to Floyd Mayweather in “Best Rapper Ever” Conversation appeared first on The Source. 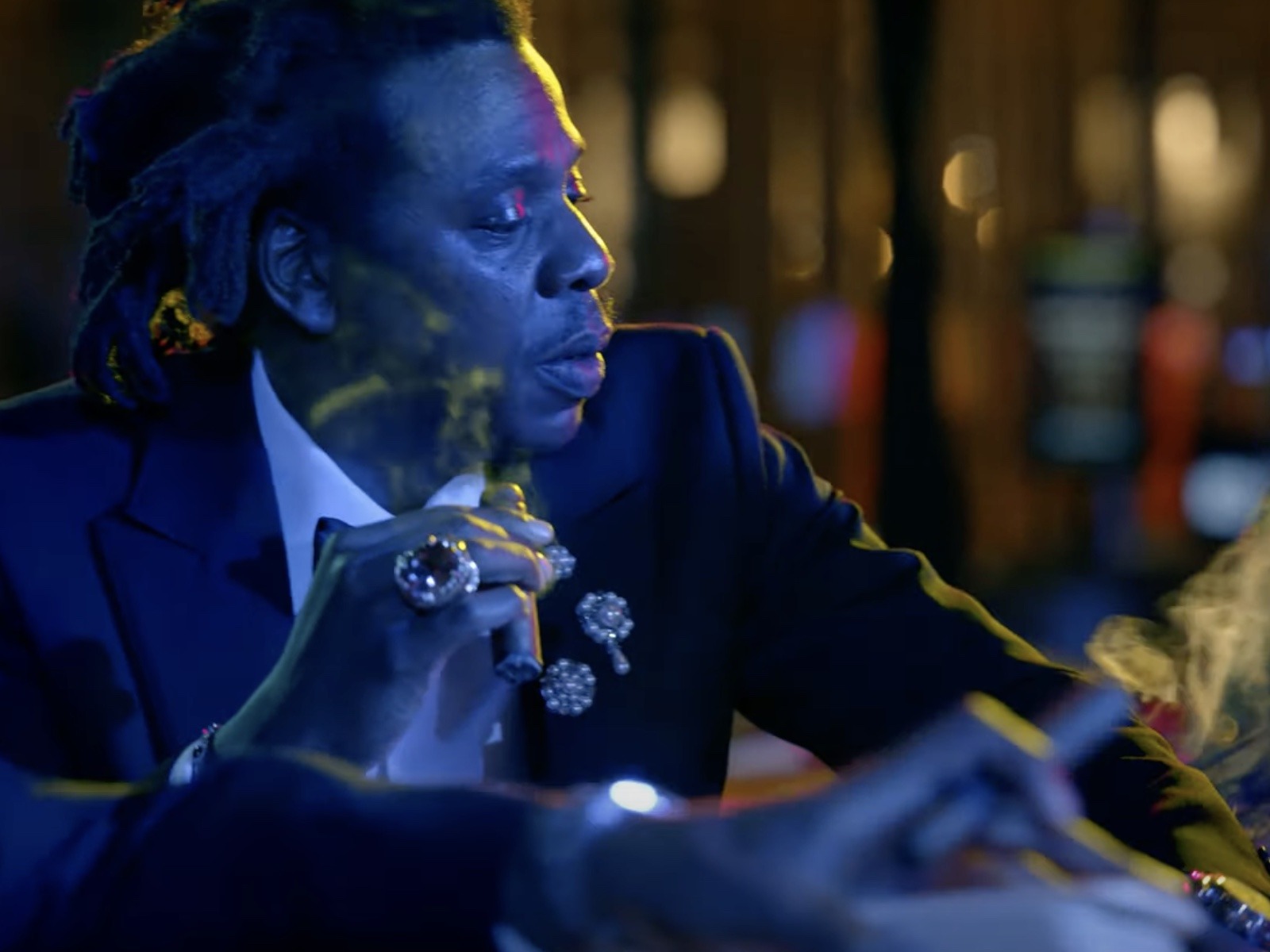 Music mogul JAY-Z is staying super active these days. The hip-hop star is catching all of the attention courtesy of new pics Roc Nation’s Meek Mill put onto his social media pages. From smoking a huge cigar to clocking in friendship goals alongside A$AP Mob’s A$AP Ferg, Young Hov steals the spotlight from the Philadelphia […] 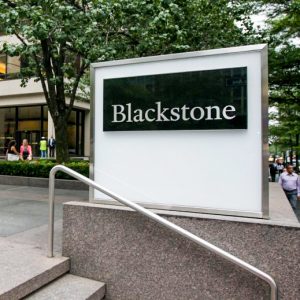 Jay-Z has been handling his business, man.

The Brooklyn rapper’s latest business endeavor is coming in collectibles.

According to Business Insider, the company has certified over 62 million collectibles with a fair market value of $50 billion, and on completion of the transaction, the value would surpass $500M.

CCG founder Mark Salzberg released a statement expressing how he feels about the new deal.

“When I established CCG, I had a vision that we would transform collectibles into an asset class that is trusted by collectors, dealers, and investors around the world,” said Salzberg. “It has been incredible to be a part of this journey as we achieved and then exceeded these goals. I am excited to join with Blackstone as we enter the next phase of growth for CCG and the collectibles market.”

This latest business deal of Roc Nation comes less than a week after Hov auctioned off his 1996 debut album Reasonable Doubt. And prior to that, in May, Hov’s Marcy Venture Partners was among several backers that invested $19 million in NFT marketplace Bitski. And earlier this year, he created no a $10 million fund to invest in minority-owned cannabis startups. 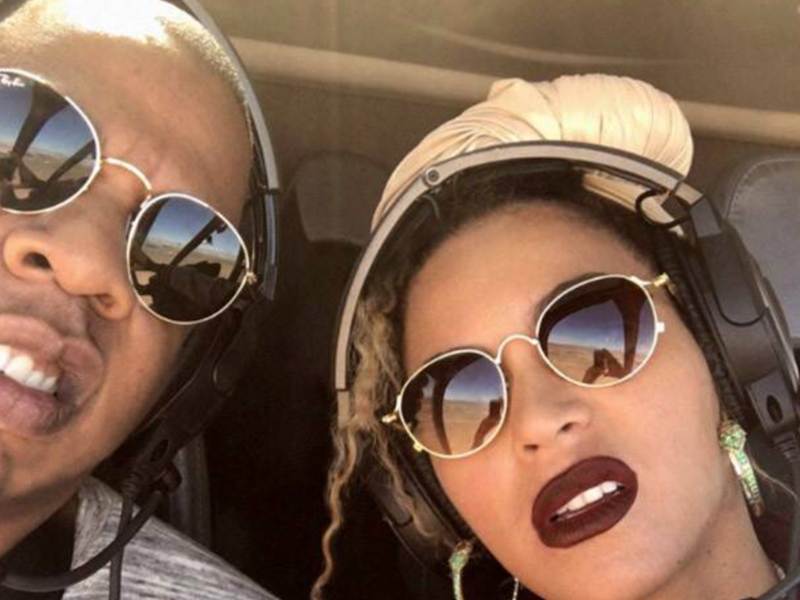