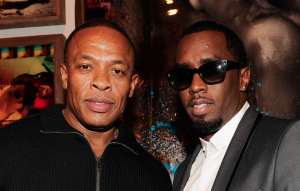 Last night during the Fat Joe vs. Ja Rule Verzuz battle, Bad Boy mogul Diddy popped in the comments on the IG Livestream to let the world know who and what it would take to get him onstage for a Verzuz battle.

Only person I would do is Dre,” wrote Diddy in the comments. One said that someone like Suge Knight woud be a better matchup for Diddy being that Dr. Dre is an actual producer behind the boards.

With the amount of hit records put out by both of these Hip Hop giants, a Verzuz between Diddy and Dre would become of the most viewed battles in Verzuz history.

The post Diddy: Dr. Dre Is the Only Person I’d Battle In Verzuz appeared first on The Source.