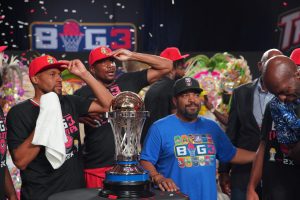 Ice Cube, iconic revolutionary rapper, actor and executive producer turned basketball businessman co-founded a one of a kind 3-on-3 basketball league, the BIG3. Since 2017, the league has consisted of 12 teams that include former NBA players and international players.

BIG3’s unique brand of 3-on-3 basketball has developed greatly in 4 years. Closing out their fourth season, the final games were hosted on the Bahamas island. Ice Cube and the BIG3 invited the season’s top four teams to Atlantis, Paradise Island, to battle it out for the big trophy. The Source Magazine was outside to cover all the action first hand.

The BIG3 league is structured differently from what you’ve seen in the NBA. 3-on-3 teams, half-court 4-point shots and a ‘Bring the Fire’ rule are just some of the aspects that make this league distinctive and entertaining.

Equipped with skilled coaches from the NBA, WNBA, and your favorite ballers from all over the world, BIG3 delivers an energy and reach far beyond a typical game of pick up.

Ice Cube and partner Jeff Kwatinetz along with league’s commissioner Clyde Drexler have secured greater sponsorship deals with Taco Bell and Triller and have amassed larger audiences with each season.

In an exclusive interview with Ice Cube, we dive into why ownership is important for minorities. Also discussed what ball players he feels are great rappers and more.

Check out some photos from the event below. Surprise appearances from 2/3 of the LOX and Flavor Flav added to the excitement of the winning team.

The post [WATCH] Ice Cube on The BIG3 “Ownership Is Important” appeared first on The Source.