Could we be getting a Floyd “Money” Mayweather verse in 2022? The undefeated boxing legend was photographed in the studio with popular NFL Wide Receiver Antonio Brown that has, of course, gone viral. The photo surfaced on Thursday morning (Mar 24), which shows AB and Floyd laughing with the billionaire in front of a mic, appearing to be rapping. No audio has surfaced; therefore, a collaboration between the two is merely speculation.

The possible collaboration would mark Mayweather’s music debut. Mayweather has been around hip hop his entire career, even as far as launching his record label, TMT, several years ago. However, the label has yet to produce a single release.

AB has been recording in Miami this week, preparing for his forthcoming debut album. AB has been in album mode since his controversial abrupt exit from his former team, the Tampa Bay Buccaneers, during last season’s game against the New York Jets in January. The Buccaneers and AB have parted ways since. After the departure, AB released his new single, “Pit Not the Palace,” which has already accumulated over million views on YouTube.

MORE: Antonio Brown Says He and Kanye Are “Extremely Serious” About Buying the Denver Broncos

Earlier this month, Antonio Brown linked up with Young Thug for a forthcoming music video. No official word on the release of the collaboration at press time. Brown is scheduled to perform at this year’s Rolling Loud in Miami.

Outside music, Brown, arguably the best wide receiver in the league, is set to have surgery on his ankle and begin searching for his next NFL team. Brown’s music is distributed via Vydia. More on the story as it becomes available.

Check out Brown’s latest music video, “Pit Not The Palace,” below. 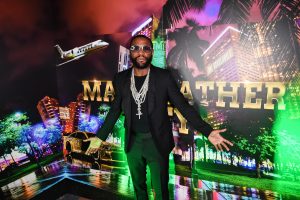 Floyd Mayweather brought in his 45th birthday like only a champion could. Mayweather was joined by a handful of notable stars. This included Kanye “Ye” West, Lil Wayne, Quavo, Lil Kim, Aaron Donald, Antonio Brown and more.

During the birthday bash, Ye took to Instagram live as everyone joined The Money Team founder in a karaoke version of Donnell Jones’ classic hit, “Where I Wanna Be.” Jones performed at the event as well. The viral moment was just one of many memorable scenes at the “Mayweather City” birthday bash.

“My focus is on creating generational wealth and doing it with partners that share my values and drive for excellence,” said Floyd.

“The partnership will have an impact on the lives of athletes and others who invest in the platform by helping them learn and create generational wealth.”

The post Floyd Mayweather Celebrates Star-Studded Birthday Weekend on the Heels of New Investment appeared first on The Source.