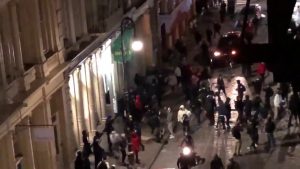 In every war, there are going to be casualties, and our hearts are with the hardworking black business owners who are victims of the recent looting.

However, many people aren’t feeling as sympathetic to larger corporations, especially the ones who profit from Black culture.

The store was one of many stores that were looted on Sunday night. According to social media, Best Buy, Chanel, StockX, Lululemon, Apple, and more stores all got hit up.

NYPD Deputy Commissioner John Miller acknowledged that extremists were showing up after protests to riot, and take advantage of the fight for justice against George Floyd.

However, a spokesperson for the Rolex store “no watches of any kind were stolen, as there weren’t any on display in the store. There were simply windows broken and some vitrines smashed.”

The post Looters Reportedly Run Off With $2.4M Worth of Watches From SoHo Rolex Store appeared first on The Source. Hollywood actor/rapper Jaden Smith is staying busy-busy in 2019. The music newcomer has blessed fans with his new SOHO music video premiere just in time for Coachella.

To celebrate the April Nite Jogger release coming up next week, a limited-run of collectible items are going to be released to the public through unexpected giveaways across two locations in New York City.

Included in the limited-edition drop will be a custom Nite Jogger bedtime story—Go To Bed, Sneakerhead—and teddy bear counterpart, the NiteBear.

The rare collectibles exist to inspire late-night creators to keep going and to keep dedicating their time to their creative pursuits—even if that means working through til daylight. Last Friday, Compton’s Boogie released his first album since signing with Eminem’s Shady Records. The record is one of the better offerings so far in a young year, following a versatile—often humorous MC who looks at a dynamic life coming out of Hub City. Besides Marshall Mathers, the most notable guest on Everything’s For Sale is Dreamville’s J.I.D. Like Boogie (who was signed for a while before venturing to Shady), J.I.D. is another MC who is part of the Interscope Records system. Both artists tell their stories without compromise or gimmicks, and each did so before Em or J. Cole took interest. This year’s “Soho” looks at how each man’s career has shifted, and how they are past the industry jibber-jabber. Boogie Shows Why Eminem Signed Him With An Off The Top Freestyle (Video) “I’m still a ni**a with needs, I need to get me a lease / Pass on the key to the streets / I need the key to the door that’s been blocking out my inner-peace,” Boogie raps, after waving off futile SoHo House meetings, social media stunts, and extensive entourages. J.I.D. follows, “Like the usual, know I ain’t meeting at Nobu / Or going for Sushi at Roku / I motherf*cking told you, I’m sick of these ni**as / Who wanna be all in the videos, in the photos / I think I should sign to Death Row though,” he spits, referencing Suge Knight’s famed 1995 Source Awards tirade. Method Man, Joey Bada$$ & J.I.D. Go Nuts On One Of 2018’s Best Collabos After grinding for years with Spillage Village, J.I.D. knows all too well the clout-chasers and fickle attention that comes with fame. In the video, both artists are groomed for the camera. Boogie is tested with different looks, which include missing an eye, braids and gold glasses and teeth. This may be a nod to check-writers and the public looking for another Fetty Wap or Migos. For his appearance, J.I.D.’s face is covered with bandage tape. Returning to Boogie for the third verse, he appears as a “Charlie doll” puppet, and then as somebody with skin that molds to every impression. This is an artful treatment on how the industry wants to shape its next stars. These two MCs have made their introductions and built their catalogs on talent. It is what got them their major co-signs and platforms. Earlier this month, Boogie released a video for “Silent Ride.” Last year, he dropped a visual for “Self-Destruction.” New music from Boogie and J.I.D. is currently on Ambrosia For Heads‘ official playlist. Eminem’s 1st Verse Of The Year Shows He’s Still At War With His Critics #BonusBeat: Boogie made a short film for Everything’s For Sale: