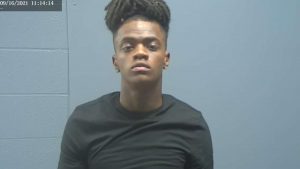 While Cuban Doll and Jordan B are going at it over the rapper, JayDaYoungan seemingly has more personal issues to face.

The rapper booked as Javorius Scott, known by his stage name JayDaYoungan has reportedly been arrested this week. Alleged charges include accessory to second-degree murder and obstruction of justice in relation to a trail ride that turned deadly last year.

The shooting took place on August 8th, 2020 around 7:30 PM. Reportedly at least 100 people were around before the gunmen opened fire.

Tangipahoa Parish authorities confirmed JayDaYoungan had a warrant out for his arrest in connection to the incident. However the “23 Island” rapper’s role in this situation is still unclear.

Authorities state that in August of 2020 the situation left one person dead, and two others injured.

According to reports the altercation stemmed from beef between two rival gangs, which led to the arrest of several members.

This wouldn’t be the rapper’s fire run-in with the law. The rapper was also arrested in April and October of 2020 prior to this incident.

In February 2020, JayDaYoungan was arrested on charges of hitting a pregnant woman who had been hiding in an attic in Harris County, Texas, police said.

Deputies in Georgia’s Cobb County arrested Scott again last October on charges that he punched and grabbed a different woman.

From the looks of the photo below ‘Dayoungan is seemingly not worried about this latest case. Share your thoughts below.