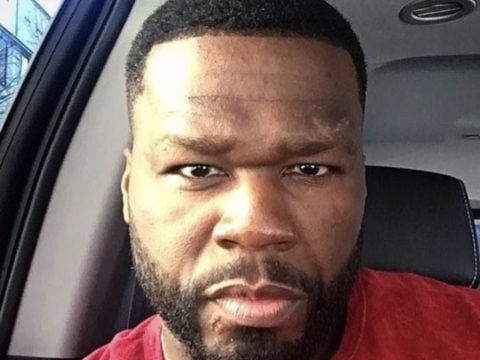 “You already know. We here, I’m celebrating, just did a new deal. Viacom. Bellator. MMA. It’s going down. You see I got the WBA right here. This right here, next year it’s gonna just be me versus me for Hustler of the Year. I’m doing it big. I’m the heavyweight champion of this sh*t right here. I got this sh*t going. You see me. Don King ain’t Don King. Don King’s old. I’m Don King. I’m the American Dream around this motherf*cking championship scene. Working the room like a motherf*cker. But they paid me, so, check this out. Give me something, a little watch, something like that, I send something over there. All that little money, the money you were upset you didn’t put into the actual boxing sh*t, I’m not upset about that sh*t at all. Not at all. If we were cool, I wouldn’t be making a deal like this right now. My n*gga, you did it. You did it, Sha. I know you didn’t mean to do it, you little retarded motherf*cker but you did it. [laughs]”

50 also went to his IG page to announce a new deal with Bellator MMA and some new signature Get The Strap apparel.

During the press conference, Coker was asked if there was a business deal with 50 yet and he replied with a surprising answer that the G-Unit boss is releasing a new album in a few weeks. “Yeah, he’s got a new album dropping in about six weeks,” Coker said around the 5:45 mark. “It’s like, look, he loves MMA. And when a big star like that loves MMA and wants to be involved, it just makes a lot of sense. And he wanted to come and check it out. This was his first time to a Bellator fight,” he continued. (Hip Hop N More)

In early June, 50 teased fans about new music in the works and promoted his now-infectious “Get the strap” catchphrase.