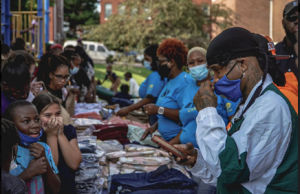 This past weekend, Grammy Award-nominated recording artist Tory Lanez dropped by Target in Baltimore, Maryland and spent $50,000 on clothes where he in turn held a giveback event at Steaurt Hill Academy and passed out the merchandise to children and single mothers in need.

Tory, who has voiced his passion to use his platform as a means to help others, partnered with non-profit organization Diamonds on the Rise where attendees enjoyed an afternoon of moon bouncing, 360 cameras, refreshments and most importantly clothing care packages.

The post Tory Lanez Spends $50K At Target On Clothes For Baltimore Children And Single Moms In Need appeared first on The Source.