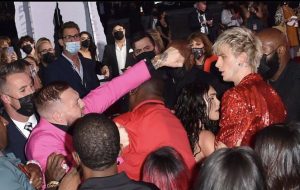 Conor McGregor says his fights are not limited to the Octagon. An explosive moment on the VMAs red carpet led to security separating the MMA star and artist Machine Gun Kelly.

Video and images show McGregor and Kelly being separated and the former attempting to throw a fist on the red carpet at the Barclays Center.

According to TMZ, Conor wanted a picture with MGK, and Kelly denied it. His security pushed Conor, who is recovering from knee surgery, and led him to spill his drink. McGregor would throw the rest of his drink at Kelly, and the respective crews would step in.

The publication heard from a source close to Conor that the fighter has no idea what the root of the problem was. You can see images and more from the moment below.