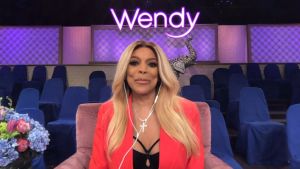 Joseline Hernandez has been in the news of late due to the success of her Joseline’s Cabaret reality show series. Hernandez was a recent guest on The Wendy Williams Show and the pair got into it just a bit, which has Twitter reacting in kind.

As the episode hasn’t aired in most markets, the reactions we’ve seen on Twitter thus far are from clips fans have posted along with their observations of the perceived shade between Hernandez and Williams. The two are familiar with one another as Hernandez has been a guest on the show in its live format.

In the episode set to air Wednesday (April 28), fans say that the testiness of the conversation was notable considering that Hernandez has been a “Hot Topic” recipient in the past. From what we can ascertain, it appears that Hernandez felt that Williams undersold the success of Joseline’s Cabaret, which most might know from the chilling “double homicide” viral moment.

The Zeus Network series is definitely a popular one, which Hernandez proudly proclaimed as being number one in its market, but it appears that Williams didn’t agree with the assessment.

As a result, the clip that has surfaced by way of one Twitter user seems to be about Hernandez wanting Williams to recognize her success rather than tear her down. According to some observers, Hernandez should’ve opted to skip the show if she was looking for approval from the popular media personality.

When the episode is uploaded to the show’s website or YouTube, we’ll come back with more breakdown of the chat. For now, check out the reactions from Twitter.

UPDATE: The interview segment featuring Joseline Hernandez is now live and running on The Wendy Williams Show. Check it out below.