When news broke last month that Kanye West was building dome-like concept homes in his Calabasas neighborhood, the idea seemed pretty neat and innovative overall at the time. However, it now looks like the whole thing was ill-fated from the beginning and has since been demolished for the most part by the City of Los Angeles.

TMZ, who also broke the original story, now reports that noise complaints from neighbors and the “minor” fact that ‘Ye never got the proper permits to start building in the first place led to the downfall of his otherwise genius idea. As of now, only one tower is still standing, as seen above in the video report by CBS LA, and even that one will have to be torn down before the September 15 deadline put in place by the L.A. County Department of Public Works.

In addition to regulation violations, Kanye and crew were reportedly doing construction for more than 12 hours on Saturdays — it’s against the area’s 8AM – 5PM building policy — and even working on Sundays, which isn’t allowed at all. Hey, maybe the new Wyoming property he just bought will be the new home for his dome community.

Do you think Kanye West is getting unfair treatment for a plan that could change the community, or did he bring this on himself for not following the proper procedure? Let us know your thoughts over on Facebook and Twitter!

The post All Falls Down: Kanye West’s “Dome Homes” Demolished Due to Noise Complaints & Permit Violations appeared first on The Source. 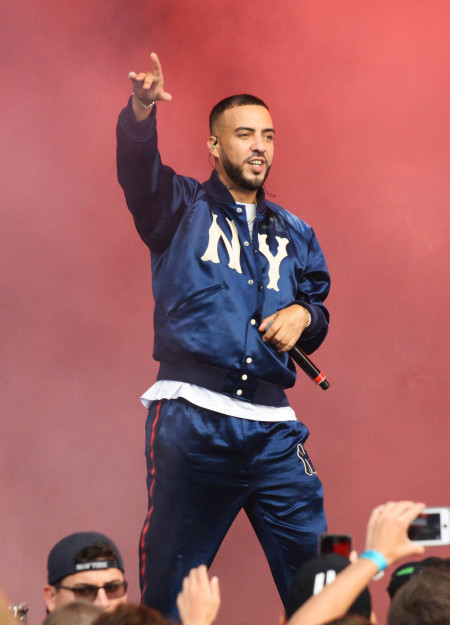 French Montana will have to look into a much calmer pet experience, this after a man claims he was bitten by a dog on the rapper’s premises. The Coke Boy’s german shepherd allegedly attacked a bit a man installing security equipment in French’s home and is suing for damages.

According to documents obtained by The Blast, Daniel Banuelos claims he was installing a security-camera system at French’s Calabasas home on August 22, 2017 when the incident went down.

Banuelos claims that while doing his job, French’s dog, Zane, “violently attacked and viciously” bit him.

The lawsuit states that the dog was “vicious” and that French was well aware of the dog’s nature.

He says the dog was kept for the purposes of “guarding the premise,” and that French “encouraged the dog’s aggressive and vicious nature in order to make the dog a greater risk and threat to intruders.”

Knowing that his dog was allegedly violent, Banuelos says French failed to “leash, tether, chain, muzzle” or take any other safety measures to ensure the dog didn’t attack anyone.

The outlet adds that French’s pooch has landed him in hot water previously after a man sued last year after allegedly being bitten three months after the previously mentioned attack.

Kanye West is always forward-thinking in his approach to things, whether it’s dealing with the future of fashion or less-than-wanted opinions about the future of American politics. However, his latest futuristic venture is actually pretty dope; Ye is now developing dome concept houses that he’s hoping will lead us into a more unified society.

YEEZY Home in the works! Each building is about 50 feet high. "Sources familiar with the project tell TMZ … Kanye is building dome-like structures that are prototypes for a new type of home … homes he believes will break the barriers that separate cl… https://t.co/CxdSb7EQGu pic.twitter.com/L0xHDl1N27

TMZ gave a first look at the unique housing structures, which were designed to actually “break the barriers that separate classes” that we as a society created with upper, middle and lower class terminology. The units are currently being constructed in his Calabasas, California neighborhood, and are said to be inspired by Luke Skywalker’s childhood home on Tatooine from the classic Star Wars universe. Dimensions for the homes are measured out at 50 feet tall and sit on an estimated 300-acre land plot. Kanye even went the extra mile by assigning his team to research the history of housing to make sure this project is as cutting-edge as it looks. Hey…”Dome Homes” sound pretty dope to us!

We’ll keep you updated as more info on these dome concept houses by Kanye West come to further fruition. Let us know if you’d live in one of these by sounding off on our Facebook and Twitter!

The post Kanye West Is Now Making “Dome Homes” in Calabasas appeared first on The Source.

Kanye West is bringing a new architectural concept to his new home of Calabasas.

TMZ reports that the multi-facet is building dome-like prototype homes that is intended to break class barriers, namely the rich, middle, and poor classes.

The tabloid obtained an image of the 50-foot dome that has been under construction for weeks. There are dozens of trucks, canes, and workers in the premises. Kanye West’s project is in the early stages but they want to create housing communities for everyone to enjoy. Ye and his team are reportedly studying living conditions “from every period of man’s existence on earth.”

TMZ says Ye’s dome homes will be “dynamic” like the home he shares with his wife, Kim Kardashian, and their children.

Yeezy has been a music and fashion innovator, and transformed his sneaker brand into a billion dollar fortune. Do you think he can dominate in land development?

Grammy-nominated singer, SZA was minding her own business while shopping for Fendy at the Calabasas location of Sephora yesterday. The Maplewood, NJ native revealed that the store called security on her based on the suspicion of stealing. A message to Sephora: do your Googles.

“Lmao Sandy Sephora location 614 Calabasas called security to make sure I wasn’t stealing, she wrote. “We had a long talk. U have a blessed day Sandy.”

Lmao Sandy Sephora location 614 Calabasas called security to make sure I wasn’t stealing . We had a long talk. U have a blessed day Sandy

That “long talk” certainly put “Sanda Sephora” in here place. The TDE artist did not call for a boycott of the store, but many should be aware of the prejudice that lies within the Sephora walls in Calabasas. She just wanted to cop some Fenty.

Her fans, on the other hand, were extremely vocal about their displeasure following the incident. One fan called for the cancellation of the beauty store brand.

“Racial establishment. Racial profile black people and have security follow them to make sure they don’t steal.”

Can a bitch cop her fenty in peace er whut

After tweeting about the incident, the 28-year-old singer may have hinted at some new music.

TDE’s president, Punch, tweeted about “a couple ideas” he has about SZA’s sophomore album.

It feels great to own your masters AND be fully recouped. Ctrl was a moment. Can’t wait to start really digging into this SZA album. I got a couple ideas lol.

Her platinum-selling debut, Ctrl earned her five Grammy nominations, two double platinum singles, and two gold singles. She recently performed medleys from her debut at Broccoli Fest in Washington D.C. last weekend. With the two year anniversary around the corner, fans are anticipating new music from the TDE first lady. As you can see Punch is excited about it.

The post SZA Calls Out Sephora in Calabasas After They Suspected Her of Stealing appeared first on The Source.