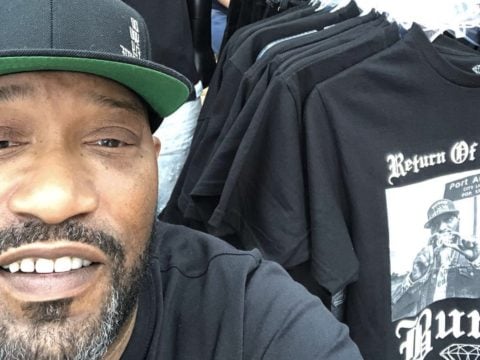 Hustle Gang leader T.I., Bun B and Funk Flex are more than upset with Trayvon Martin‘s killer. The trio have hit up social media to react to George Zimmerman allegedly signing autographs on Confederate flags and Skittles candy packages.

This past Sunday, the three hip-hop personalities shared their frustrations and disgust toward Zimmerman.

I’ll just sit this here for all you stark raving thugs,gunnas,&goons out here plotting on each other. In case you’d like some reading material,or you frustrated and in need of something else to think about.

This man was found not guilty for murder (Trayvon Martin)… look at this pic he took? U know what it tells u? This man right here never had any intention of Trayvon getting home safe! BUT we wonder why racial tension exists! As no one continues to “check” him on his actions! George beat that case but he’s not gonna escape KARMA!

The pics originally stem from the “Rest in Power: The Trayvon Martin Story” six-part TV documentary which premiered in July.

The controversial image can be glimpsed at around the 27 minute mark of the final episode, as Andy Hallinan, the owner of a Florida gun shop that teamed up with Zimmerman to sell Confederate flag paintings after his Florida Gun Supply store was maligned for declaring itself as a “Muslim Free Zone,” recounts a “party trick” Zimmerman used to do for his fans: ‘One of the big party tricks that George would do is that he’d always have a few bags of skittles in his pocket then when somebody mentioned something like “Hey, good job,” George’s response would be to take a bag of skittles, sign it, then hand it out.’ (Snopes)