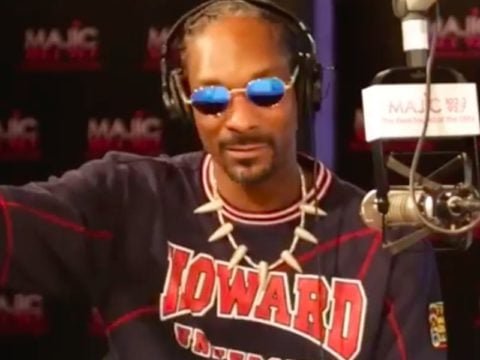 West Coast rapper Snoop Dogg can see his life on the big screen. The hip-hop veteran has imagined what it would look like to bring his life story to a much-needed biopic.

In a new interview, Snoop Dizzle reveals his ideal biopic would focus on multiple decades rather than his rap game come-up.

“I’m thinking more along the lines of, when you watch great shows like ‘Narcos’ on Netflix, you see how ‘Narcos’ went from Escobar to the Cali Cartel to now it’s about to go to Mexico. I’m thinking like a Snoop Dogg biopic. Late 60’s with my mother and father. Pops was in Vietnam. 70’s, when I was born in ’71 and in the hippie era growing up. 80’s, football, selling candy, uh oh, cocaine, selling drugs. Gang banging. 90’s, rap. 2000’s. You know what I’m saying? But you see what I’m saying? To me, that’s more enticing than a two-hour Snoop Dogg movie.” (Majic 102.3)

**EXCLUSIVE** PT. 1: During my interview w/ @snoopdogg I asked him about doing a biopic for TV or in theaters… but he had a totally different (and very creative) idea in mind about how he wanted to give us his story…

Dogg also admitted he has a couple major Hollywood stars attached to his potential biopic.

“I already got with somebody. I don’t want to expose the names like that but I got some big wigs connected to it – you want me to tell you the names? In conjunction with Lee Daniels and Ryan Coogler. Yes. That’s what we doing. That’s what we’re thinking.” (Majic 102.3)

**EXCLUSIVE** PT. 2: @snoopdogg revealed for the first time… two MAJOR forces he has secured to work on his biopic…