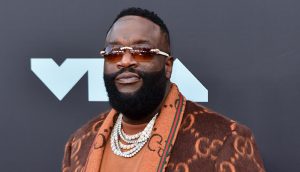 Rick Ross is known for his boss moves. Earlier this year, Ross’ 235 acre Atlanta estate was the Coming to America sequel stage. Over the year, his investment portfolio has grown with several fast-food chains (Checkers and Wing Stop) in addition to real estate. He says he got his real estate knowledge from his mother, work invested while working as a nurse.

“She would just keep buying houses. And I would say, ‘Mom, what do you think about the stock market?’ And she would say, ‘Son, I don’t really rock with the stock market. I don’t know much about it, but I know about real estate. So when you buy something, make sure you can touch it.’”

Ross’ 16-year-old son, William Roberts III, recently celebrated his birthday. His father gifted him with one of his many assets. Now he is sharing those assets with his son.

“Everyone wish my son @mmbigbank HAPPY 16TH BIRTHDAY !!! Today he became the owner of his 1st @wingstop franchise. Your now officially a BOSS !! Keep Going.”

The generational wealth is certainly being passed down in the Roberts family.