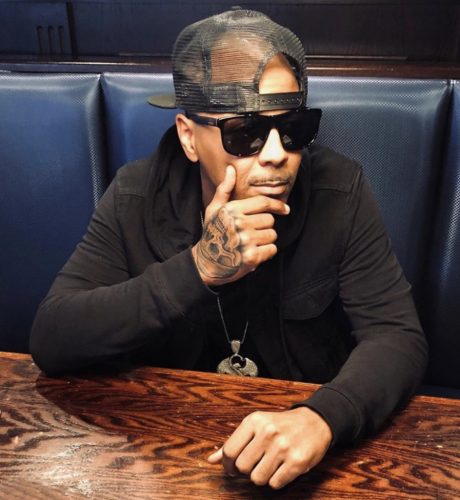 I remember my first concert ever pretty clearly actually. I was like 6-7 years old at the time. My parents took me to see MC Hammer haha. I remember the Kansas City Chiefs players beating on the drum on stage! It was at the Kemper Arena in Kansas City. I remember seeing Hammer & all 87 of his dancers & shit on stage, hahaha. Phenomenal. I think that’s when I knew I wanted to entertain. That was big.

Who’re some artists that inspire you?

I draw more inspiration from normal people than artists to be honest. Real life situations & interactions. As artists, we tend to be “in the clouds” at times haha. Nothing wrong with that, but I get more inspiration to say something about people who come to me with an everyday problem. Co-parenting, relationship issues, trust issues, family problems, etc. Don’t get me wrong though, many artists have inspired me. A lot of them my own peers actually. Also a lot of them are the most iconic icons of all time. Frank Sinatra, James Brown, Led Zeppelin. Just kinda depends. My grandfather (Bill Johnson) has always been a huge inspiration of mine. I believe I can draw inspiration from anything.

When was it when you realized that this was your calling?

Man that’s a tough one. I’ve been rapping in basements & house parties & in cyphers for years & years. Like 11-12-13 years old, I started doin’ that shit with my brothers & cousins. Obviously I was the best one but we were all terrible back then, haha. So I guess I’ve always kinda known that this was something I wanted to do. At some point or another. And I used to play basketball too. Like heavy into basketball. But my family has always been into music. Like for real. Grandparents, uncles, aunties. Everybody.

Where did your moniker originate?

I’m from Kansas City, but I lived in Chicago for a few years right outta high school. Lived on the west side in Forest Park then migrated downtown. One of the best times of my life. But if I remember correctly, I was in the studio with some Chicago artists I got connected with. I’m usually a pretty calm dude. My demeanor has always been laid back, cool, & collected. Until you piss me off, haha. But anyway, I was in the studio writing a verse on this couch & this dude said, “man this nigga always so Joe Cool about shit!” So it kinda just stuck. For a couple years actually, then my Italian cousin (Jimmy Tony) hit me up & said, “yo start having people call you Joey Cool instead of Joe Cool. It’s got a better ring to it.” And that’s how it started. The Swank Sinatra name came from The Chairman & his constituents. Their way of life is something we try to incorporate as well.

How did you cross paths with Tech N9ne to the point of signing with Strange Music?

In Kansas City when I was comin’ up, there was a pretty prominent underground Hip Hop scene in the city. Record Bar & Riot Room were like the fuckin’ pyramids or some shit. Only a select few got to actually touch those stages back then. I remember my first headlining show at Record Bar back in 2011 or somethin’ like that…I was rockin’ during my set & turned around & Tech was standing on the stage. Just me & him. People screamin’ & shit it was wild. First time that ever happened to me. Had a lot to do with JL as well. He was always talkin’ me up to Tech. Puttin’ me on to legendary niggas from the hood too. So anyway, that’s when I knew Tech was watchin’ me. He don’t just show up to people’s local shows for no reason ya know? After that it was pretty much history. We developed a bond & became good friends, which is way more important to me. The fact that I can pick up the phone and call Tech N9ne & he’ll answer immediately is still surreal to me at times.

Your sophomore album Old Habits Die Hard that came out over the fall is your most mature work to date in my opinion. Could you describe the process of making it?

That was actually one of the first times I’ve created/recorded music in different places throughout the country. Usually when I’m in album mode, I’m at home writing day and night. Listening to production over & over. Then I’ll either record it with Burna Music or take it to Strangeland & knock it out. But I picked like 5-6 of my favorite producers and asked them to send me the slaps. Only a couple of them had ideas for me as far as song concepts go. Usually I work with the same guys because they’re really fucking good at what they do. Same thing with this new album Coolie High. This is a step up from Od Habits Die Hard, trust.

Couple weeks ago, you dropped an EP in preparation for a new album entitled Coolie High. What’s the inspiration behind that?

I’ve been really into funk & soul for the past year. James Brown is one of my spirit animals. Man was a genius. Like, literally came up with a whole sound. So I’ve been heavy on the bass lines & overall production on this album. Every song is different. You’ll have to hear it to understand it. I don’t know how it works, but it does. I’ve gone back to singing, which a lot of people don’t know I love to do & I incorporated my grandfather, Bill Johnson a lot more on this. Just conversations with him. He’s from a different era. People were different back then. Stronger. I take pride in that.

Anything else planned for 2020?

I’m definitely looking forward to getting back on the road this year. Gotta get out there & fuck shit up. So be on the lookout for that. And please stay tuned to this album, it’s somethin’ special.

Lastly, do you have advice for anyone trying to set their foot in as recording artists?

My advice is always, “don’t do it.” I know it sounds fucked up, but it’s how I feel. If you’re not 100% in from the beginning, it’ll eat you alive. You have to sacrifice a lot. You have to feel rejected a lot. You have to have thicker skin than most. You have to be willing to be judged off of something that you created out of thin air, then present it to people, all to be judged & criticized for it. You have to be slightly crazy to wanna do this shit. But, for the greater good, I can’t lie & tell you it’s not worth it. Balance is the key. As it is in life.