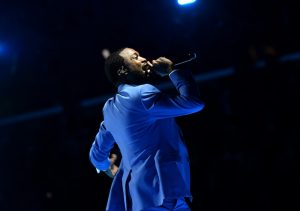 We are nearing Meek Mill SZN. The leaders of the Dreamchasters has announced his formal return with the Expensive Pain album due out on Oct. 1.

The new release is Meek’s fifth studio album, and the cover is based on an original painting by Nina Chanel Abney.

Ahead of Expensive Pain, Meek Mill has released a plethora of singles. Most recently, Meek teamed with Lil Uzi Vert for “Blue Notes 2.” After shining light on their studio session, Meek dropped “Sharing Locations” with Lil Durk and Lil Baby.

In addition to being a grammy-nominated artist, REFORM Alliance co-chair, and rising businessman, Meek Mill is the recipient of the Nelson Mandela Changemaker Award.

PTTOW! (Plan to Take on the World) awarded the Dreamchaser at an invite-only community and summit for today’s most creative and inspiring CEOs, CMOs, and Icons, spanning 70 major industries.

Meek received the award at a private ceremony this past Thursday, where he was awarded for his work on the REFORM Alliance. In celebration, Meek dropped the “Mandela Freestyle.”