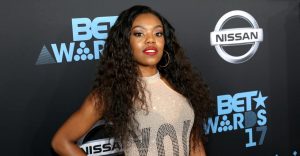 Melesha Katrina O’Garro BEM aka Lady Leshurr has been laying down bars straight from the UK since 2013. While making a name for herself in both the UK and the US, it is without a doubt that Lady Leshurr is keeping up with the rap girls who are dominating the game right now. In 2019, Leshurr took home the Best Rap/Grime Act award, followed by another successful win in 2020 for Best Solo Female at the Birmingham Music Awards.

At the start of the year, Leshurr opened up about an opportunity given by Atlantic Records, where she was offered $250K to make a diss track towards Nicki Minaj. While she denied the money, Leshurr opens up about the entire ordeal in a sit-down on BBC Three, where she explained the temptations of the lump sum.

“Genuinely, that’s what happened. That just came from me doing a cover of “Look At Me Now” — you know, Busta Rhymes. Then Atlantic Records was trying to reach out. Fast forward, I’m sitting down in front of this guy with my manager at the time, and he’s just like, ‘Yeah, we basically want you to do a diss track to Nicki Minaj,’” she began.

“This is after I play them my whole EP or whatever, I’ve got coming out,” Lady Leshurr explains, “and it’s like he just didn’t even care about it. I just knew something wasn’t right.”

“I’m not gonna lie. I went back on the flight home, [and] I was balling ’cause I’m thinking, ‘Yo, this might be my only opportunity to get my mom a house,” she continued.

Leshurr then explained that although the large amount of money tempted her, she does not regret denying the offer as Nicki Minaj eventually invited her on tour.

Talk about irony. Check out the video of Leshurr discussing the situation below!