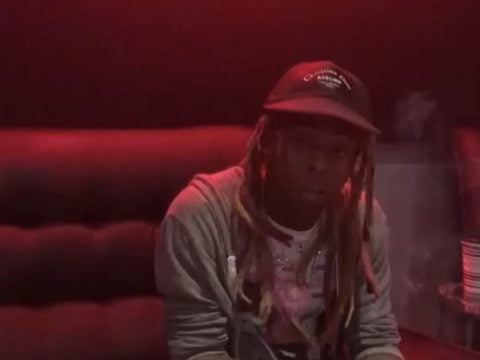 “Good morning. Tunechi here. First let me start off by saying thank-you again to all the fans, the supporters for my music, for Tha Carter V, it’s awesome, it’s amazing. It’s unbelievable. Cloud nine. But today, this morning, I want to talk about something. My man Odell Beckham Jr. is taking a lot of flack, taking a lot of heat about this interview him and I done with Josina Anderson. First of all, let me thank Miss Josina Anderson, let me thank Odell for the interview. Let me just say first, I’ve been seeing things, I’ve been hearing things like if he wants, he being Odell, if Odell wants to be taken seriously, why would he do an interview with Lil Wayne next to him? I’ve heard things like that and I’ve seen things like Eli Manning said ‘I don’t watch Lil Wayne much.’ First of all, to the person that said, ‘How can he be taken seriously with Lil Wayne sitting next to him,’ the person that said that is a reporter, whatever, journalist from New York named Frank Isola. Frank, I rock with you, I actually like you. When you come on TV, I like you. I like your accents, your heavy New York, Italian whatever accent. I like the way you just do your thing. You say what you want to say and get your point across. You mentioned my name. My name came out your mouth this time. When that happens, I’m going to fire back at you. I only get on here to do positive things and great things but Frank, come on. I know you’re up there in New York. I know a little bit about New York, I spent time on the island out there called Rikers Island. I know a little bit about New York but I don’t know much about you though. Fact is you don’t know much about me. With that said, keep my name out your mouth.”

Wayne also questioned why Eli wouldn’t show him some support after being asked for his reaction to his and Odell’s interview.

“Now to Eli, man, every time I do an interview about you and somebody is about to, it doesn’t even have to be an interview – everytime someone bad mouths you I’m the first to say – you can ask Skip Bayless, first thing I say is, ‘Listen. I got a homie that was doing time that remembers seeing Eli, Archie, Peyton, Cooper, he remembers seeing them at five in the morning every other morning on the school yard way before the students got there. I was the first one to back you up like, ‘He got two rings before his brother.’ And here you are saying you don’t watch or know [me]. That’s fine, that’s fine. I’m cool with you. I don’t care what you watch or listen to or nothing like that but man, it’s just hometown love. You ain’t got to do me like that. I didn’t say anything bad about you. So I ain’t going to say anything bad about you now. Still hometown love. I f*cks with you Eli. You ain’t got to watch much of me but you can listen. You probably need to the way you’ve been playing. You probably need to bang some Carter V before the game, just for consideration.”

Wayne finally circled back around and addressed any salty reporters feeling a way about him appearing alongside Odell for the must-watch Q&A.

“I think you, as in all of y’all, y’all are just a little upset that it’s not y’all who can get somebody with a number one album, thank God, and one of the greats of the NFL to sit down in a room together and get on camera and give such a great interview. And for you Frank, I heard you also said I didn’t say anything. I was just like a ‘Yes man,’ saying yes to everything. Frank, you should know that was edited. That was a real great interview by the wonderful Miss Josina. She asked me some things that made me open up as well. So the thing is when you’re someone who is talking, it doesn’t have to be on-camera. When you’re talking amongst people and you see they’re being real and they’re being genuine and that they’re being authentic. Nine times out of ten, if you’re true to yourself or whatever, you’re going to be the same way. Maybe that’s the reason why he opened up like that and he was being real because I was being real and Josina was just keeping it real. And I think that you guys are just upset that you weren’t on the other side of the table asking questions because I don’t think you’d even get a chance to do such a thing because if I or Odell is on the other side of the table with you, whoever you are, Frank, we probably wouldn’t even answer the questions. So to answer your question, why should you take him serious if he’s sitting next to Lil Wayne? To answer that, it’s because Lil Wayne is serious and I was serious when I said keep my name out your mouth, Frank. Thanks for getting Tha Carter V to all the fans the supporters. That sh*t crazy. I love that sh*t. What the f*ck though? Where the love go, Eli?”

This week, ESPN reporter Josina Anderson explained her motivation behind snagging Odell and Wayne for the “Sunday NFL Countdown” segment.

Start with the participants. Anderson has developed a rapport with Beckham (“I think I tend to connect well with people who are very authentic,” she told Sporting News), and she knew he had a strong connection with Lil Wayne—as well as a tattoo of the rapper on his leg. When she learned Wayne would be in New York promoting his new album, she got the pair to agree to a joint appearance on little more than a day’s notice. (Sports Illustrated)

The post Lil Wayne Claps Back At Eli Manning & NY Reporter After Odell Beckham Interview: “You Mentioned My Name – I’m Going To Fire Back At You” appeared first on SOHH.com.