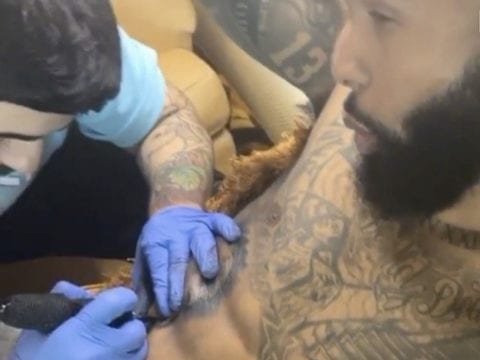 NFL superstar Odell Beckham Jr. is showing true loyalty and love to the memory of late NBA icon Kobe Bryant. The Cleveland Browns wide receiver has added a major ode to Black Mamba in the form of a huge permanent tattoo. Watch and comment below! 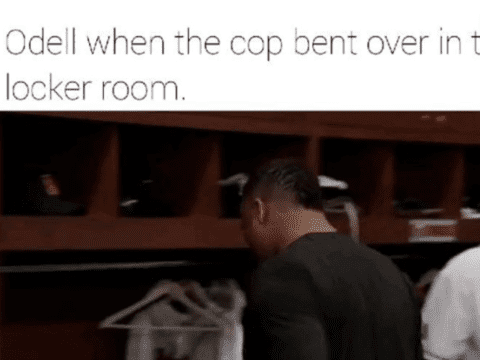 The Internet doesn’t wait around for anyone – especially Odell Beckham Jr. Social media has gone in-in on the Cleveland Browns star wide receiver over a police arrest warrant being issued.

Big Facts: This week, the Internet went off-off on OBJ with memes centered on him catching heat for playfully spanking a sports stadium security guard.

Wait, There’s More: According to reports, the victim initially wanted to retaliate toward Odell but ultimately sought out legal action.

That’s when he felt NFL football player Odell Beckham Jr. slap him on the backside. The 48-year-old lieutenant said his first reaction was to punch Beckham, a former LSU player, but that he kept his cool. The next day, however, the officer called the New Orleans Police Department and said he wanted to press charges, according to court records. (NOLA)

Before You Go: The punishment reportedly could cost Odell a fine and possible jail time.

Louisiana statute defines simple battery as battery committed without the consent of the victim. Punishment in Louisiana can include a fine of no more than $1,000 and imprisonment for no more than six months, or both. “We are aware of the incident and have been in touch with Odell and his representatives on the matter,” the Browns said in a statement issued Thursday. “They are cooperating with the proper authorities to appropriately address the situation.” (ESPN) 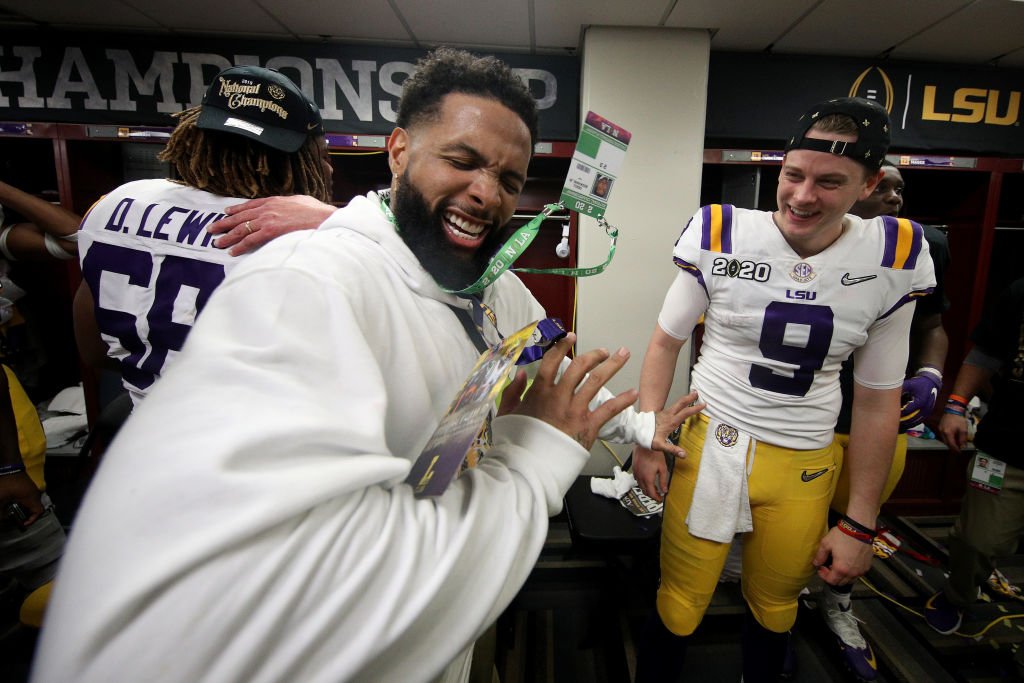 Odell Beckham Jr. can’t win for losing. It seems the star NFL wide receiver’s antics while celebrating his old college team LSU’s national championship win over Clemson has led to a warrant for his arrest.

NOLA.com reports that on Thursday morning (Jan. 16), New Orleans police obtained an arrest warrant for Beckham Jr., accusing of simple battery for his interaction with a police officer at the Mercedes-Benz Superdome on Monday night (Jan. 13).

The authorities referenced a video where Beckham is seen slapping a male police officer on the buttocks. In the clip, the officer is seen talking to LSU right guard Damien Lewis, seemingly checking to see if he has any contraband—smoking a cigar. Never mind that Lewis is still in his uniform. Reportedly, cops initially said anyone caught smoking would be arrested, but another cop later said that would not be the case.

OBJ wasn’t gonna let that officer spoil the fun.. told him to get the gat.

Anyway, back to the video…Beckham is then seen playfully (maybe, probably drunkenly) slapping the officer on the butt. Shockingly (sarcasm), the officer didn’t pull out his weapon and attempt to arrest Beckham, who continued to make light of the situation.

Joking in such a way with a cop is a bad idea, especially in Louisiana. And clearly it doesn’t matter if you’re an NFL player. Beckham has now surely figured this out.

Reportedly, the New Orleans PD sought a warrant for a misdemeanor sexual battery charge, which the judge declined. However, a new warrant was drafted for a simple battery charge and was given the green light. If convicted, Beckham could get up to six months in prison and a maximum fine of $1,000.

You can see the video above. Really?

Jarvis Landry responded to reports that he is trying to get out of Cleveland and join the Arizona Cardinals. The original reports said that Landry told the Cardinals sideline during Sunday’s game “come get me” but the former Miami Dolphin is denying that claim.

“I would never look to another team during a game especially that we’re losing and say come get me…” Landry told reporters. “Don’t try to slander my name. If you didn’t hear me say it directly you shouldn’t have to be able to report it.”

Landry’s current teammate and former LSU teammate Odell Beckham Jr. also shot down reports of wanting out of Cleveland in what has been a lackluster season. There have been conflicting reports on whether or not Beckham Jr. told the Pittsburgh Steelers the same “come get me” phrase, but Beckham acknowledged that it’s just been a tough season and is not thinking about offseason moves.

Beckham is poised for career lows in catches, touchdowns and receiving yards in a season that he’s played at least 12 games. Despite the poor performance from the team, Jarvis Landry has been selected for the 2020 Pro Bowl along with Browns RB Nick Chubb.

The post SOURCE SPORTS: Jarvis Landry Denies Wanting to Be Traded to Cardinals appeared first on The Source. 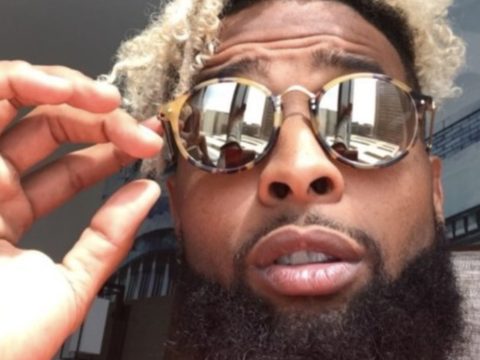 The Internet is filled with endless visuals and SOHH‘s here to capture a few of the best ones. Today, check out Odell Beckham Jr. showing off an insane jersey collection, Kevin Gates wearing a mask to fend off haters and Lil Pump putting respect on his own name. Watch and comment below!

Cleveland Browns star receiver Odell Beckham Jr. was involved in a scuffle with Baltimore Ravens cornerback Marlon Humphrey during their Sunday afternoon game, which saw OBJ on the receiving end of a choke.

The two players go physical during the game and cameras appear to show Beckham Jr. throwing a punch prior to the choking. Jeff Zrebiec of The Atletic details Humphrey complaining to officials about being grabbed by the neck by Beckham Jr. Humphrey would then take it into his own hands, literally.

A play or two earlier, Humphrey was screaming at back judge, alleging OBJ grabbed him by the neck.

OBJ and Humphrey going at it. pic.twitter.com/r6bxIo0Uum

Head Coach of the Browns, Freddie Kitchens, states he will contact the league office regarding the incident.

“I saw what you saw. He was getting choked on the ground,” he said to ESPN’s Sal Paolantonio. “They get away with that because it’s Odell. I’m going to be one the phone with Al (Riveron) when I get on the bus.”

The post SOURCE SPORTS: Odell Beckham Jr. Choked by Defender During Win Against Baltimore Ravens appeared first on The Source. 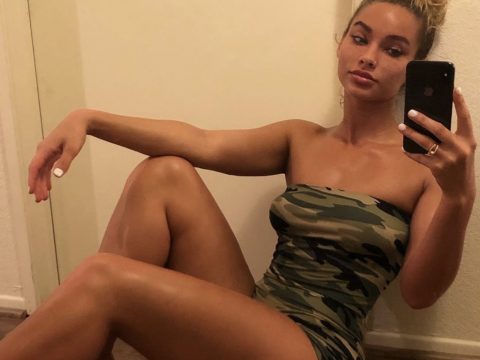 NFL superstar Odell Beckham Jr. is reportedly clocking in major relationship goals with a certified vixen. The Cleveland Browns wide receiver and model Lauren “Lolo” Wood have heated up the Internet with twinning moments together donning the same sneakers.

The post Here’s A Low-Key Look At Odell Beckham Jr. + His Curvy Model Girlfriend Twinning Together appeared first on SOHH.com. 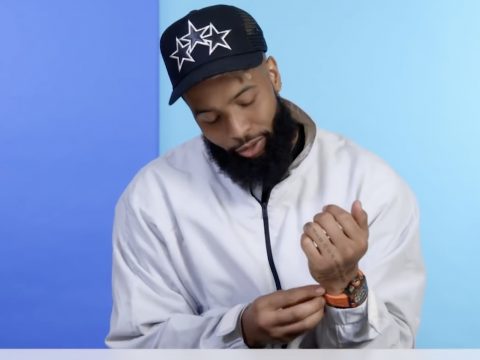 NFL superstar Odell Beckham Jr. has some pretty reasonable necessities. The Cleveland Browns wide receiver has dished out his Top 10 favorite things he needs on a daily basis. 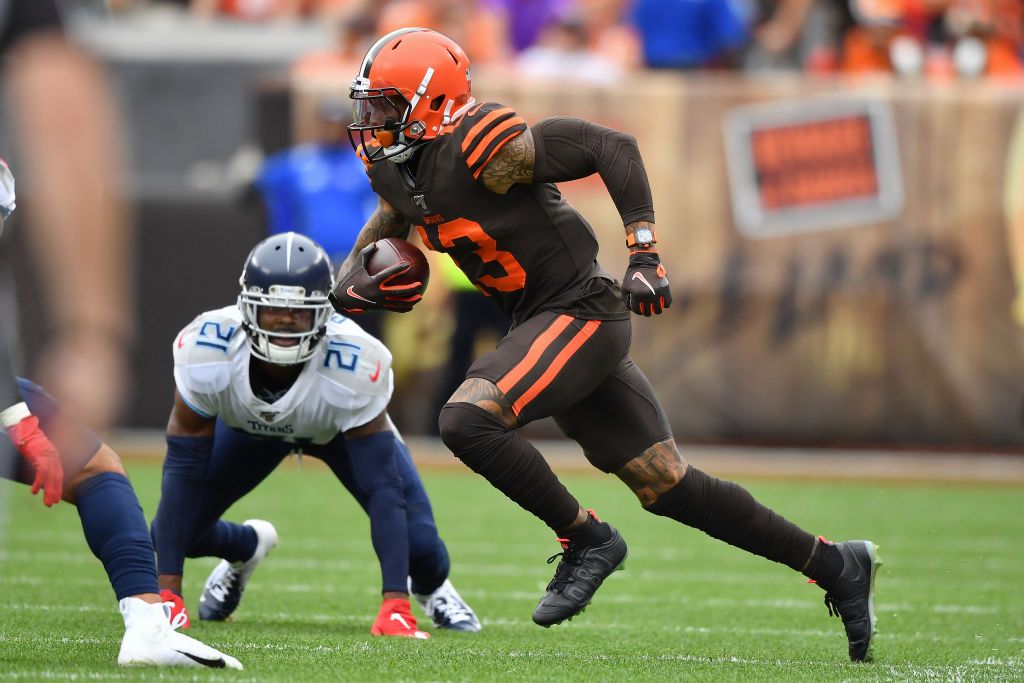 It is clear Odell Beckham Jr. secured the bag with his new Cleveland Browns deal. The star receiver showed up on the field wearing someone’s life earnings on his wrist.

On Sunday (Sept. 8), OBJ was spotted playing with a very pricey timepiece in the Browns’ game versus the Seattle Seahawks. The watch in question was a Richard Mille 11-03 McLaren Flyback which carries a price tag of $189,500. It features a skeletonised, automatic winding movement with variable-geometry rotor offering hours, minutes, seconds, flyback chronograph, 60-minute countdown timer at 9 o’clock, 12-hour totaliser, oversize date and month indicator. It originally debuted at the Geneva International Motor Show in Switzerland earlier this year.

Complex reached out to the luxury brand to get their thoughts on the once in a lifetime product placement. “Since the brand began, Mr. Mille only forms partnerships with athletes who commit to wearing a Richard Mille watch while they perform their sport,” said Laura Hughes, Director of Communications at Richard Mille, Americas. “They provide the ultimate proving ground for the highly complicated timepieces that are created to be ultra comfortable and precise timekeepers in extremely challenging physical conditions.”

But to hear Hughes tell it was OBJ’s decision to wear the watch and he was not provided any incentives  to do so. “Richard Mille has had a genuine relationship with professional athletes for many years, and it only gets deeper. However, OBJ is not a brand partner and it is his decision to wear his watch on the field”.

While the flex was well-received online by his fans and naysayers alike, it seems the watch violated the NFL’s dress code against wearing hard objects. The  McLaren Flyback not only costs a house but is also limited in production with only 500 watches made. You can see more about below. 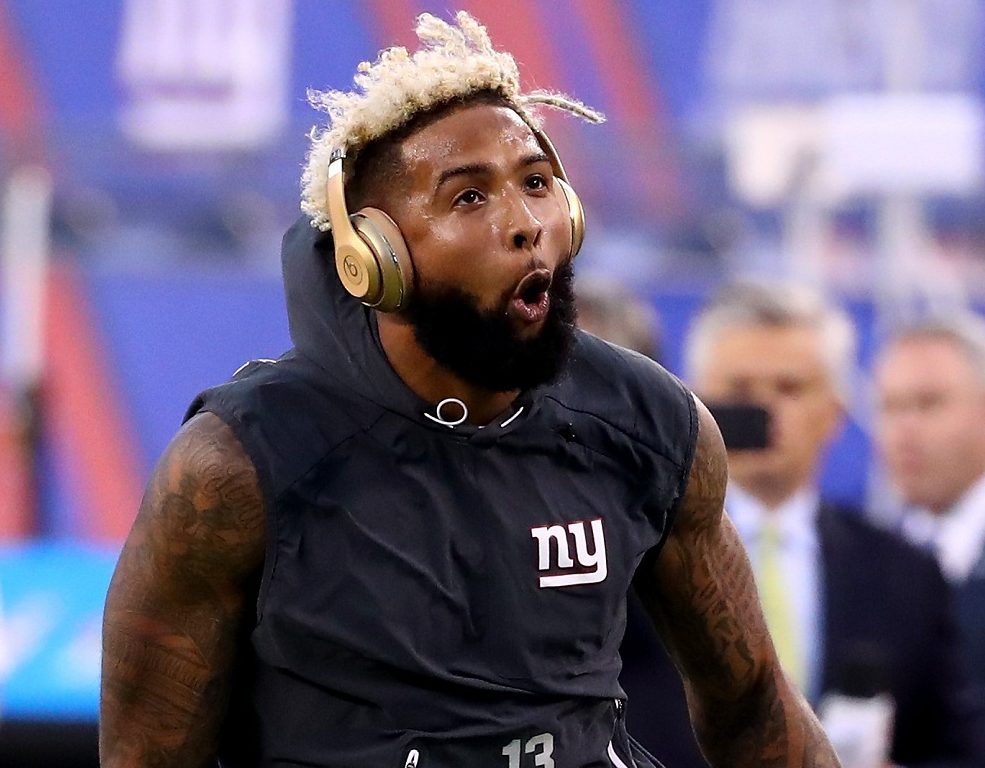 Source: EAST RUTHERFORD, NJ – SEPTEMBER 18: Odell Beckham Jr. #13 of the New York Giants warms up prior to their game against the Detroit Lions at MetLife Stadium on September 18, 2017 in East Rutherford, New Jersey. (Photo by Al Bello/Getty Images)

Looks like 50 Cent is giving Ja Rule and Irv Gotti a much needed break from social media slander and is now taking friendly aim at Trey Songz and Odell Beckham Jr.?! What’s OBJ ever do to him?

Either way 50 decided to troll the R&B crooner and NFL wide receiver over the weekend when he took to IG to announce he had blocked the Cleveland Brown for posing in his Calvin Klein drawers as part of his deal with the clothing brand. Posting the pic of OBJ in his CK underwear, 50 captioned the post saying, “ok you blocked nigga, I told @treysongz don’t be doing shit like this no more and here you go.”

ok you blocked nigga, I told @treysongz don’t be doing shit like this no more and here you go.

Kinda surprising that this is coming from a man who once bubbled G-Unit tank tops with what many said were bra straps. It was kinda weird but we digress.

Last month 50 and Trey got into a funny back-and-forth about a similar situation with Fiddy taking issue with Trigga’s half-naked post.

Luckily for everyone this is just friends roasting each other on social media and OBJ took the time to address everything and apologized to the “fellas” who follow him and might’ve felt a ways about the post.

#OdellBeckhamJr issues a PSA after he posted his latest pic to the gram!! (view earlier post)

Of course 50 would have dudes apologizing for getting that bag by any means necessary.