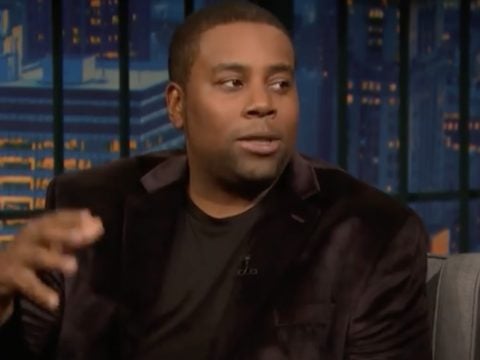 Appearing on “Late Night With Seth Meyers” last night, Thompson weighed in on what went down.

“I don’t know if that’s the moment necessarily to hold people hostage like tha. But hey, you know. … I felt so bad for those guys. Because it’s hard to stand there and not be able to debate somebody who’s going so far against your personal opinion.” (“Late Night With Seth Meyers”)

“I’ll tell you this, he needs to stay in the house. Honestly. I feel bad for Kim [Kardashian] and the kids – he does not appear to be all there, I know controversy sells, but this is a little controversial.” (“The Wendy Williams Show”)

A few days ago, Kanye fully stood up for donning his Make America Great Again hat and explained why he believes it’s a positive thing following the “SNL” appearance.