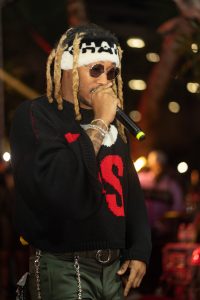 Future hosted a benefit concert for Haiti in Miami over the labor day weekend.

Haiti was hit by a whooping 7.2-magnitude earthquake back in August. More than 2,000 people are reportedly dead along with widespread devastation across the country. According to Haiti’s Civil Protection Agency, around 13,000 people are reportedly injured, along with 50,000 homes have been destroyed. This does not include those who are still missing and unaccounted for.

With Haiti aiming to rebuild the High Off Life rapper intends to use his benefit concert to raise funds and awareness for the country’s recovery through his FreeWishes Foundation.

“I would love for all my friends, family, music industry, fashion, and all other industries, and people as a whole to stand up for Haiti.”

“I want to use my voice to do whatever I can to support Haiti during these tragic times and will be doing a benefit concert on September 3 in Miami. Tap in to support. – Pluto.”

The restoration of Haiti will be a long and arduous process. The foundation has partnered with Direct Relief to administer 100 % of the net proceeds to support the restoration effort in Haiti.

Check out some photos from the event below.

The post ICYMI: Future and FreeWishes Puts on For Haiti, See Benefit Concert Pics appeared first on The Source.