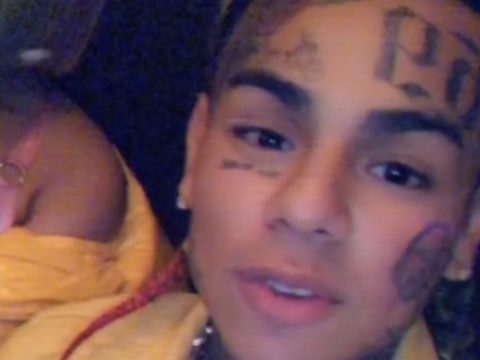 New York rapper Tekashi 6ix9ine is leveling up in a big way from behind bars. New reports claim the hip-hop artist might have secured a multi-million dollar record deal despite being in prison.

According to reports, 6ix9ine has landed a deal worth more than $10 million from his ex-label 10K Projects.

As TMZ writes, the controversial rapper will receive the money in exchange for two albums once he’s released from prison. 10K Projects previously released his debut mixtape Day69. The details surrounding the rumored deal remain ambiguous, but it’s been said that one of the projects will be in English while the other will be in Spanish. It’s unclear what will happen to the deal if 6ix9ine is given a long sentence, as he’s facing the possibility of 47 years behind bars. (Complex)

This week, buzz developed about 6ix9ine already putting his next album together.

“It looks like he will be making music right away when he comes home,” said a music insider. “He already contacted a young NYC producer, and someone purchased two beats for him.” Tekashi, who will be sentenced in December, was facing a minimum of 47 years for firearms and racketeering charges, but snitched on a number of people to reduce his sentence. (Page Six)

The post 6ix9ine Might Have Just Landed $10 Million Album Deal From Prison – NO CAP appeared first on .