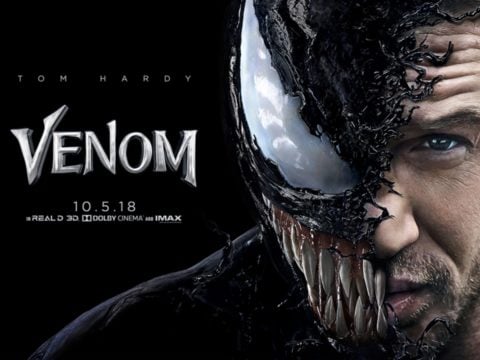 Are you bored with staying inside? Need a reason to get out for an action-packed thrill ride? Are you about that Marvel life?

Today, check out the top five reasons you should go see Venom when it swings into theaters Friday, October 5! [Check out each reason and grab your exclusive passes to a select movie screening while tickets are available!]

The first reason you should go check out Venom when it arrives in theaters Friday, October 5 is because of the overall plot. Let’s face it – when it comes to the Marvel franchise, they go all-out to make sure there’s a solid story and plenty of connections to other films. While this isn’t your traditional Marvel Studios film since Sony is behind it, you can still expect plenty of signature touches as we’ve come to expect from Marvel Entertainment. Pretty much like you’ve come to expect with Deadpool, plan on seeing Venom stand on its own two feet. Ah – as far as the plot goes, via Google/Wikipedia:

Journalist Eddie Brock is trying to take down Carlton Drake, the notorious and brilliant founder of the Life Foundation. While investigating one of Drake’s experiments, Eddie’s body merges with the alien Venom — leaving him with superhuman strength and power. Twisted, dark and fueled by rage, Venom tries to control the new and dangerous abilities that Eddie finds so intoxicating.

If you’re big into the Venom comic books and of course those epic Spider-Man movies and cartoons, there are some hopes we might see Carnage and hopefully even a Peter Parker cameo.

The second reason Venom should be your go-to movie next month is because of the star-studded cast. It’s not enough to have blockbuster actor Tom Hardy take on the role of Eddie Brock but you’re also getting the amazing graces of Michelle Williams, Riz Ahmed, Scott Haze and Reid Scott soaking in plenty of camera time. Details currently remain slim but there’s plenty of buzz about Jenny Slate, Woody Harrelson, Sope Aluko, Michelle Lee and Mac Brandt coming through with undisclosed roles. If you’re looking for a stellar cast, look no further than that line-up. Of course the attention will remain on Tom Hardy but much like we saw in 2015’s Mad Max: Fury Road, there’s nothing like a strong co-star – shout-out to Charlize Theron! This is a must-see for all Marvel fans!

The third reason Venom should be a must-see for anyone interested in action-packed movies is because director Ruben Fleischer is due for a major blockbuster. While he hasn’t put up Michael Bay type numbers or grips of movies at this point in his career, he has plenty of gems to his name. His most notable flick Zombieland even has a sequel set to drop next year. But over the last 10 years, Ruben has put out movies like 30 Minutes or Less and Gangster Squad. Needless to say, when it comes to action, excitement and humor, he has all of those areas checked off. Venom should give him all the star power and interest to get him blockbuster box office sales.

The fourth reason you should go see Venom on October 5 is because of the overall genre. It’s going to be well over six months before we get to see how The Avengers: Infinity War sequel goes down and almost just as long before Captain Marvel arrives in theaters. Until then, it’s all about soaking in the nerdcore comic flicks you can get your hands on. Venom is going to satisfy those needs at least for the next few months, easily getting us into 2019 most likely with tons of replay value and a big Digital HD and Blu-ray release just in time for the holidays.

The fifth reason you should see Venom on October 5 is because this is easily one of the biggest releases that weekend. With fall weather in full swing, there’s nothing worse than staying inside – you’ll have plenty of those nights when winter arrives. While The Hate U Give and A Star Is Born are sure to be tearjerkers, this is a movie you can expect to geek out on and enjoy from scene to scene. Even if you plan on seeing other movies during this opening weekend, get things started off right with Tom Hardy’s must-see release.

Grab your Venom screening passes below while they last!

The post Venom: “This Is A Must-See For All Marvel Fans” [Grab Your Free Tix Now!] appeared first on SOHH.com.