By now everyone knows about the friendship between Jaden Smith and Tyler, The Creator.

Still the nature of their relationship is still hazy. Are they simply best friends or are they a little more?

Over the weekend at the Camp Flog Gnaw Carnival , Jaden put out there new and interesting facts about their relationship. He started off by saying he was the best friend he could ever have. But then he declares with a slight chuckle that Tyler is his “muthaf*ckin boyfriend!” In the video below, posted on DJ Akademiks’ IG, you can see Tyler immediately hopping up and wagging his finger “no” and later falling back and laughing.

Perhaps this is all a joke? Jaden did giggle a little while saying it. The two are also extremely frat-boy-prankish in how they engage their fans and how they troll the thin line between the characters they are in their music and who they really are in their real lives. Later, Jaden kept it going on social media by saying:

Yup @tylerthecreator I Told Everyone You Can’t Deny It Now.

And Tyler replied in good sport, “hahaha you a crazy n*gga man.” 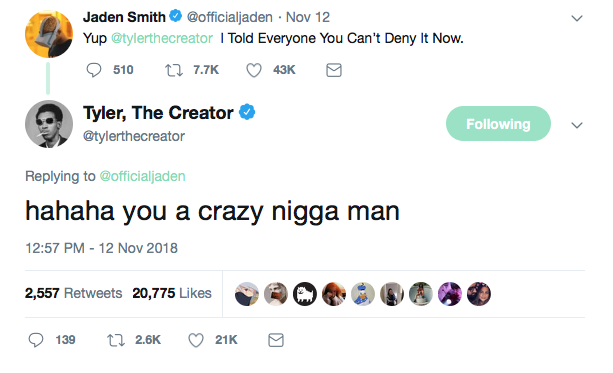 Social media, Hip-Hop/ entertainment news outlets and v(b)loggers had a field day either taunting the sexuality of these two twenty somethings or defending their right to same gender loving. Some even suggesting that him wagging his finger was not strong enough to deny the truth of what Jaden is saying. Some are questioning about why is Jaden “crazy?” Is he “hahaha” crazy or did he bump his head? Does it matter? If so, why does it matter to us? After all, both rappers have toyed with the public on their records, in films and in social media for years. Who can forget when Tyler tweeted this out to fans?

Or the kiss that Jaden had with another guy on Netflix’s “The Get Down,” which either proved he had done that before or was a really great actor?

We can’t forget that they are really friends and have a whole lot of fun trolling folk!

Regardless of the many lyrics that the two have about sexual fluidity, the fashion campaigns that they have rocked wearing dresses or tweets shot out there, true fans believe that this was a ploy to expose the homophobic nature of Hip-Hop that still exists and giving the two (and their crew) more fodder to laugh at from their intellectually enlightened towers. This is about conversation and opening up in a space where toxic masculinity dominates, Hip-Hop.

We’ve come a long way since Wendy wanted to expose the gay rapper… now this generation of Hip-Hoppers are daring you to do it… and snatching the power away from your threat.

The post Tyler, The Creator Calls Jaden “Crazy” Regarding His “Boyfriend” Comment appeared first on The Source.