Travis Scott is putting the rumors to rest.

In the wake of his breakup with Kylie Jenner, the Astroworld rapper is addressing reports that he cheated on his ex.

“It’s really affecting when u see false things said about u once again these false stories about me cheating are just simply not true,” he wrote on his Instagram Stories Friday.

“Focusing on life, music, and family at this moment is what’s real,” added Travis, who also dropped his new single and video “Highest in the Room” on Friday. 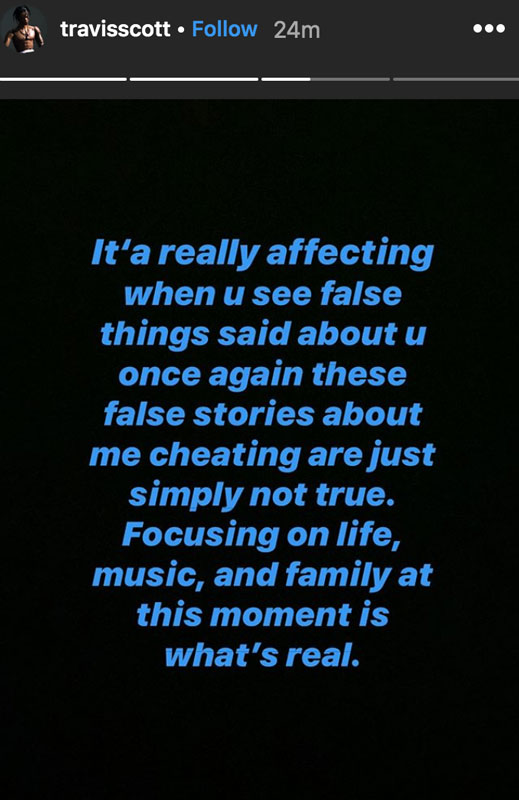 Following their split, rumors began circulating that Scott had been cheating with Rojean Kar. The Instagram model, who goes by YungSweetRo on Instagram, has also refuted the cheating allegations.

“None of these rumors are true, it’s just the internet creating a false narrative,” she wrote on her private Instagram account. “Please stop spreading lies & leave us alone because it’s affecting real lives. Thank you.”

“Yungsweetro” posted something about rumors between Travis Scott and her. She said everything is fake. Waht do you think?

Scott and Jenner decided take a break from their relationship after over two years together. She reportedly wanted to get married and have a second baby, while Travis is focused on his career. They remain friends and will continue to co-parent their 20-month-old daughter Stormi.

our friendship and our daughter is priority

our friendship and our daughter is priority,” the beauty mogul tweeted earlier in the week.

She also shot down claims that she is hooking up with her ex Tyga. “The internet makes everything 100 times more dramatic than what it really is. There was no ‘2am date with Tyga,’” tweeted Kylie. “You see me drop two of my friends off at a studio that he happened to be at.”