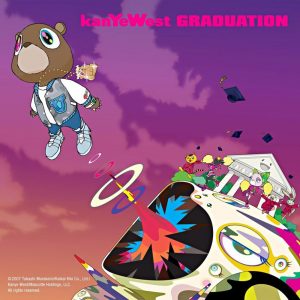 On this day in 2007, the “old” Kanye released his third studio album, the last of his scholastically themed albums, which is aptly titled Graduation on the Def Jam/Roc-A-Fella imprint.

With the success of his The College Dropout debut and his sophomore Late Registration, Kanye was already on an unprecedented ascension that popular culture was totally unprepared for. The concurrent releases of 50 Cent’s Curtis album and Graduation also created a unique promotion of both projects. However, with West as the newer, “rookie” artist, he was the favored underdog in the competition between the two. Graduation was the obvious winner in terms of sales, selling almost a half-million copies on its first day on the shelves.

Graduation offered several smash singles that gave Ye’ propelling momentum beyond his musical peers and set him well above the rest. Songs like “Can’t Tell Me Nothing,” “Stronger,” and “Good Life” with T-Pain on the help-out made 2007 probably the best year of Kanye’s career. Aside from the fact that Graduation earned Kanye a Grammy and an AMA, this last installation of his tetralogy served as the last piece of happiness before tragedy struck when Ms. Donda West passed away from coronary artery disease and multiple post-operative factors due to or as a consequence of liposuction and mammoplasty just two months later.

Salute to Yeezy, DJ Premier, T-Pain, Lil Wayne, and everyone involved in the Graduation album. Definitely an important piece of Hip Hop history!