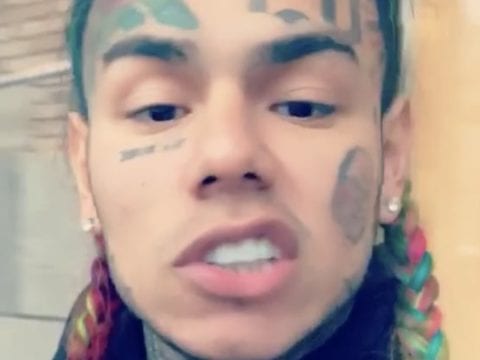 New York rapper Tekashi 6ix9ine is back-back. The hip-hop star has reminded fans he’s one of the top trollers in the world just days after getting released from prison.

6ix9ine low-key returned to social media this weekend to make fun of his past cooperation with federal prosecutors. Tekashi joked about helping rat out Los Angeles businesses not meeting a stay-at-home order.

According to reports, 6ix9ine received the green light to get out of prison early. A judge approved his request to finish out his final months behind bars in a racketeering case at home because of the current coronavirus epidemic.

“#Breaking: It’s done, Judge Engelmayer’s order on #6ix9ine has just come out, US asked that it be delayed: 69 “shall serve the first four months of supervised release on home incarceration, to be enforced by GPS monitoring, not to be docketed until 4 pm April 2″”

On Wednesday, reports emerged about 6ix9ine’s possible legal victory. Buzz generated revealing he could get out from behind bars if a judge gave him the green light.

In a document shared by respected court journalist Matthew Russell Lee, who has covered all the trial dates of Tekashi 6ix9ine’s hearing, the rappers legal team claim the government have until 5pm to deny his release. The document from United States District Judge Engelmayer says that the court had received a request from Daniel Hernandez aka 6ix9ine for compassionate relief and that that had been denied. However, the document goes on to say, ‘…his application to convert the balance of his term of imprisonment to home confinement is now administratively proper’. (Capital Xtra)

The massive news immediately generated a ton of social media reactions. People lit up their Twitter pages to share mixed thoughts on 6ix9ine getting out of prison.

The post Tekashi 6ix9ine Finally Comments On Social Media After Prison Release By Trolling Himself appeared first on .