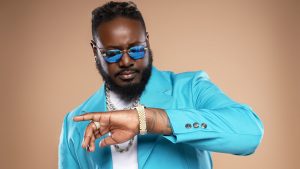 While his new single “That’s Just Tips” moves around hip hop, T-Pain, 37, joins the likes of J.Cole, Pharrell and Jay Z with the launch of his very own music festival, titled “Wiscansin Fest,” in Wisconsin this June.

MORE: T-Pain Teams with TIDAL for ‘1-833-4-TIPSONTIDAL’ to Give Tips to Emerging Artists

The award-winning recording artist and wife, Amber Najm, announced Wednesday (May 11) via social media that the inaugural Wiscansin Fest will debut June 11 in Milwaukee at Rave.

The “Buy U A Drank” creator, who has been building up anticipation for the first-ever festival with a 19-city “The Road to Wiscansin Tour,” names a 17 acts line-up with the announcement that includes chart-topping superstars and longtime collaborators of the Tallahassee native, featuring Lil Jon, O.T. Genasis, Bleu (Formerly Yung Bleu), K Camp, and Hannibal Buress with a DJ-set as the moniker Eshu Tune.

“The first of its kind @nappyboyentertainment presents a line up that I hand picked myself,” T-Pain wrote with celebration emojis in the Instagram caption with a photo of the Festival flyer. “This one means so much to me. Go get your tickets link in my bio before they sell out. See you on June 11th in the only place that felt right- Milwaukee, WISCANSIN.”
“Wiscansin Fest!! @tpain’s first ever festival and I’m so proud of him. Y’all get your tickets now!!,” captions a proud Amber Najm in an Instagram post promoting the upcoming festival flyer.

The word “Wiscansin” originates from T-Pain’s verse on the 2008 classic “Can’t Believe It” featuring Lil Wayne from his gold-selling third album, Three Ringz (Jive). T-Pain changed the pronunciation of the state, Wisconsin, to “Wiscansin” to make a rhyme with “mansion. The success of “Can’t Believe It” spawned a remix with Justin Timberlake. In 2018, T-Pain launched a collegiate-themed apparel line, Wiscansin University, inspired by the word.

Headline by T-Pain-himself, see the complete line-up to the inaugural Wiscansin Fest below.

Very Handsome Billy
VIP and general public tickets for Wiscansin Fest are on sale now. You may purchase your tickets here.