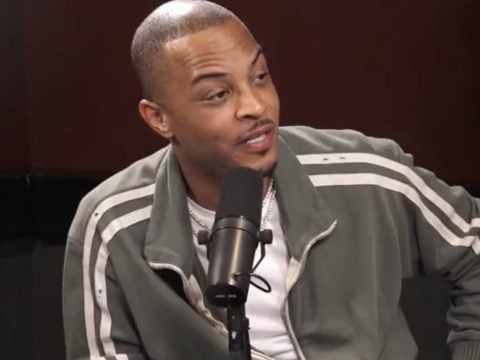 Grammy-winning rapper T.I. has some thoughts on what’s going on with Kanye West right now. The King of the South has dished on Yeezy’s state of mind in 2018.

In a new “Ebro in the Morning” appearance, Tip suggested Ye’s publicized outbursts and headline-generating statements date back to the 2009 MTV Video Music Awards run-in with country singer Taylor Swift.

“This is just me and my observation. I think all of this, I believe all of this started with that MTV thing with him and Taylor Swift. When he got on that stage thinking that he was taking up for Beyoncé, doing the absolute wrong thing as Kanye normally does but he had good intentions. He felt like MTV wasn’t acknowledging Beyoncé who had the video of the year, he felt like they were giving it to somebody just because she was white and a pop artist. So he stood for that. He thought he was doing something noble. He thought he was doing something righteous and he got sh*tted on for that. The president of the United States called him a jacka** for that. You dig what I’m saying? Called him a jacka** – that’s what I’m saying. So us as a culture, when that happened, he kind of Anakin Skywalker’d himself. You dig what I’m saying? He insulated himself and started going to the dark side a little bit. Even if he was wrong I feel like those closest to him were like, ‘You were tripping for real but here’s how we get through it.’ … I feel like he heard our silence more than he heard that [negative MAGA supporters] noise.” (Hot 97)

Some fans became suspicious after Taylor announced that her upcoming album Reputation would drop on November 10, which is the ten-year anniversary of Kanye’s mother’s death. (While Taylor has yet to respond to the coincidence, her label did address the date, saying that it’s “standard practice that releases come out on Fridays and we locked in this release date based on other Universal Music Group releases.”) Still, it would seem that many Kanye fans are upset about the unfortunate overlap — so much that they decided to “reclaim” November 10 as “Hey Mama” day. (Teen Vogue)

Days prior, Swift’s camp shut down rumors about her trolling Kanye by putting out her Reputation album on the 10-year anniversary date of his mom’s death.

“It is standard practice that releases come out on Fridays and we locked in this release date based on other Universal Music Group releases,” a publicist at Swift’s label tells PEOPLE. “There is no correlation.” (People Music)

In 2016, West’s wife Kim Kardashian talked about wanting to move away from the Swift feud.

Chatting with Billboard for its latest cover story, the Keeping Up With the Kardashians star, 35, said that she wishes there was no more bad blood with the “Shake It Off” singer, 26. “Ugh, do we really have to talk about Taylor Swift? … I’m so over it,” Kardashian told the publication with a laugh. “If it were up to Kanye, it all would probably never have come out. He can handle it, he has no hard feelings. He doesn’t even really care. I just wanted to protect my husband. I saw him getting a lot of s–t.” (Us Weekly)

The post T.I. Thinks Kanye West’s Antics All Stem From Taylor Swift MTV VMAs Incident: “The President Of The US Called Him A Jacka** For That” appeared first on SOHH.com.