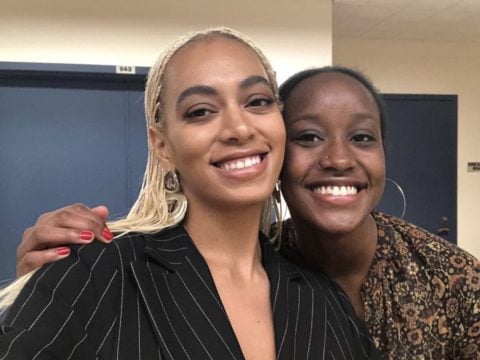 R&B singer Solange is on her A-game. The crooner has come through to slay in a batch of new pics and announce an upcoming solo album.

In a new T: The New York Times Style Magazine feature, Solange reveals her follow-up to 2016’s A Seat at the Table is coming this fall.

She has come to this spare, meditative place to put the final touches on her album. What’s it called? How many songs are there? Who did she collaborate with? How will she tour it? The album’s release is imminent this fall, probably sometime soon. But, even within this studio, Solange keeps these details close: The record will likely arrive into the world fully formed at some mysterious and unexpected moment, like a meteor cratering into the culture. But she will not be rushed. (T: The New York Times Styles Magazine)

This past weekend, Solange share some new, unexpected pics.

Over the last 12 months, Solange has kept busy making music and building her legacy.

This year, Solange was named the Harvard Foundation Artist of the Year. She also revealed that she’s been working on new music with Steve Lacy. The artist unveiled a new performance art piece called Metatronia in April. She previously created an outdoor performance of her song “Scales” at Donald Judd’s Chinati Foundation in Marfa, Texas; that project prompted a change of perspective for the new LP, she tells T: “I realize how much wider, figuratively and literally, my work could be if I took myself away as subject.” (Pitchfork)

today truly brought me so much joy, my heart is so full…

to be selected harvard foundations “artist of the year” by these tremendous, glorious students I met today….to witness all of the greatness they put into the world, and then they deem me worthy of this moment, fills me with such great gratitude. i’m grinning from ear to ear because this beautiful gals name is solange too, and she is a wonder! thank you to all of the students who made today one I will hold close forever more!