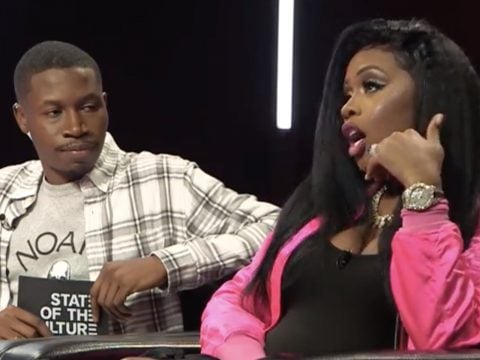 New York rapper Remy Ma has zip-zero interest in keeping tabs on the Cardi B and Nicki Minaj feud. The hip-hop veteran has weighed-in on the rap stars’ publicized issues toward one another.

In a new “State of the Culture” broadcast, Remy admitted the worst part of the Nicki/Cardi feud ended up being how quickly they called a truce.

For the slow ones in the back on the blogs, I offered money for the footage from the venue. I have footage on my own camera but I was asking for the overhead footage that the venue may have. #QueenRadio. Y’all listen to snippets of my show & think y’all Albert Einstein. #DipVIDEO

Not gonna lie, I can’t stop watching the #DipVIDEO

btw, it’s not a rmx… it’s official. Thank you guys for another RECORD BREAKING #QueenRadio show! I wish you guys understood how much I love you.

The only rapper in the history of rap who can only talk about deals and songs she’s supposedly turned down cuz she can’t talk about a verse she’s ever written. Fkn fraud

I’ll pay you to take a lie detector test about every claim I made on #QueenRadio. You won’t. I must admit you’re a convincing liar. You looked me dead in my face & said you told ya man not to do the “no flags” video cuz I was dissing you. London on da Track got the same call.

Same thing with Steve Madden. Irv Gotti asked me to do that deal several times. I passed. You never hear me talking bout things like this.

she rlly thought she was doing smthn talking about turning down deals. BWAAAAAHAHAAAHAHAHAAAAA #DipVIDEO out now.

Her lawyer just called my agent threatening him for putting out the receipts.

Ok you guys, let’s focus on positive things only from here on out. We’re all so blessed. I know this stuff is entertaining & funny to a lot of people but I won’t be discussing this nonsense anymore. Thank you for the support & encouragement year after year. Love you.

Instead of staying mum, Cardi went on a massive rant exploding on Nicki.

Who needs Monday Night Football when you've got this??? lol