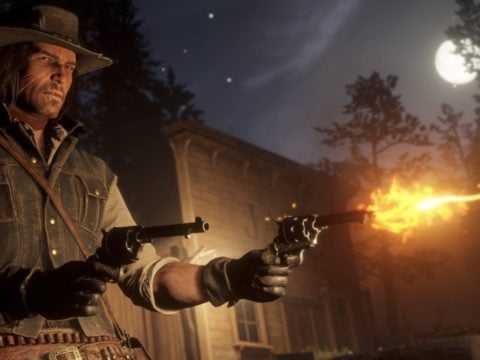 According to Rockstar, the title easily had the biggest opening weekend of all time.

An epic tale of honor and loyalty set in the dying days of the outlaw age, Red Dead Redemption 2 follows Arthur Morgan and the Van der Linde gang as they rob, steal and fight their way across the rugged heartland of America in order to survive. Following a botched robbery in the western town of Blackwater, the gang is forced to flee and, with federal agents and the best bounty hunters in the nation massing on their heels, deepening internal divisions threaten to tear the gang apart, leaving Arthur to make a choice between his own ideals and loyalty to the gang who raised him.

The massive opening sales has officially put the game up on Grand Theft Auto V‘s level.

That tops the highest-grossing movie in history, “Avengers: Infinity Wars,” which earned more than $640 million during its opening weekend earlier this year. But “Red Dead Redemption 2” still isn’t the highest grossing entertainment launch of all time. That honor also goes to Rockstar Games for “Grand Theft Auto V,” which earned more than $1 billion in sell-through in its first three days. Because “Grand Theft Auto V” launched on a Tuesday, it left the door open for “Red Dead Redemption 2’s” — which launched on a Friday — record-setting weekend. (Variety)