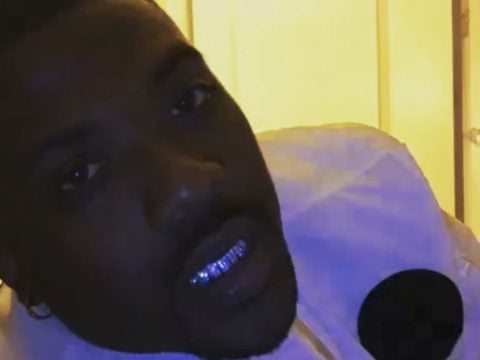 R&B singer Ray J knows he can’t change the past. The crooner has come forward to speak up on his now-infamous sex tape with ex-girlfriend Kim Kardashian.

In a new interview, Ray said he didn’t regret the x-rated footage despite it leaking to the masses in 2007.

He famously starred in a sex tape with Kim Kardashian in 2003 which was leaked to the world four years later. But singer Ray J, 36, told MailOnline exclusively that he has no regrets over the tape that propelled Kim Kardashian into the spotlight and netted £100m since its release. He said: ‘I don’t regret anything I’ve done. Not even the sex tape, it’s shaped me into the person I am today and helped me find The One.” (Daily Mail)

A couple years ago, Ray J appeared to make a reference to the sex tape on his Raydemption album.

The new single off Ray’s upcoming album Raydemption certainly seems to allude to his infamous sex tape with the reality star-turned-mogul. “She f*cked me for fame, look in her eyes,” rhymes Ray J. “She was the first one to sign on the line / She was the real one to plan it all out / Look at the family, they walk around proud / All because she had my dick in her mouth.” (Rap-Up)

Weeks prior, Ray hinted at his intent to finally respond to jabs thrown at him from Kim K’s husband Kanye West and his “Famous” song.

The first single and video from Raydemption will be “Famous,” which features Chris Brown (whose look-alike was also in Kanye’s “Famous”) and will address West’s video of the same name. Although Ray J avoided mentioning The Life of Pablo rapper and Kardashian, he said, “You can’t fault me and Chris for responding to all the things that have been done about us [in the media] over the last few months.” (Billboard)

In the original song, ‘Ye raps about Ray J’s relationship with Kim Kardashian: “I bet me and Ray J would be friends if we ain’t love the same b*tch / Yeah, he might’ve hit it first / Only problem is I’m rich.” (Rap-Up)

The post Ray J Keeps It 100 On Kim Kardashian: “I Don’t Regret Anything I’ve Done. Not Even The Sex Tape” appeared first on SOHH.com.