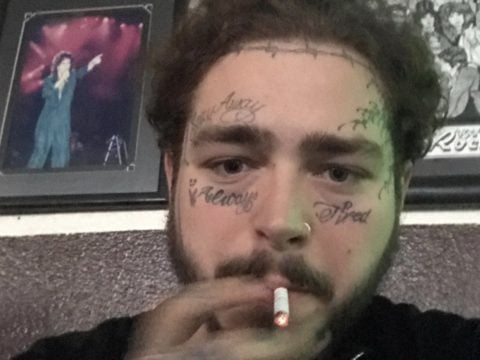 Texas rapper Post Malone looks like he’s cooking up with God’s Son. The hip-hop artist has shared a priceless pic of himself alongside music veteran Nas.

The rapper’s Rolls Royce crashed into a Kia and then smashed through a fence and came to rest in some shrubs, according to Sgt. Andrew Meyers of the Beverly Hills Police Department. Meyers tells Billboard that the incident took place at Doheny Dr. and Santa Monica Blvd. around 2:42 a.m. and that the car owned by Posty, 23 (born Austin Richard Post) was being driven by his assistant, with the rapper in the passenger seat. (Billboard)

| Rapper Post Malone involved in early morning crash in West Hollywood. Reports from the scene indicate the celebrity rapper was reportedly being chased by paparazzi when his Rolls Royce ran a red light and crashed. There were no significant injuries to any of the involved parties. West Hollywood sheriffs deputies are handling the investigation. . . . . . . #ANGNews #PostMalone #Celebrity #Crash #westhollywood #beverlyhills #cops #sheriff #deputy

Despite the seriousness, Malone and his assistant did not need immediate medical attention.

No injuries were reported from the accident, Sgt. Diana said. He also said no alcohol was involved in the crash. Malone, né Austin Richard Post, and his assistant were photographed on the scene speaking to authorities while the car was towed away. Its driver’s side door was completely smashed in. (People)

Malone went to Twitter to low-key reference his accident.

god must hate me lol