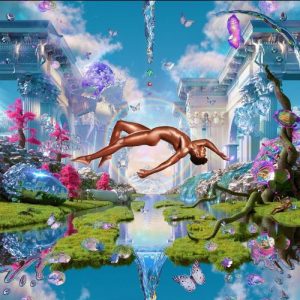 Drake’s Certified Lover Boy will have competition at the top of the charts for its third week. Lil Nas X’s Montero album is projected to move up to 140,000 album-equivalent units in his first week. According to Hits Daily Double, 17,000 – 20,000 of those units are pure album sales.

In an interview with The Breakfast Club, Lil Nas X responded to the parents who call him out by saying he is too inappropriate for their children to watch him at award shows or look at his music visuals.

“I feel like I used to [have a responsibility], but now it’s just like, ‘So? Like, f*** your kids,’” he said. “We really get one chance to do this — at least to my knowledge — I don’t know what happens when we die or whatnot. So it’s like, I’m not about to pander to your kids, or you. I even have to do this with my family members, like, because my family members may not always agree with what I’m doing or whoever I’m dating, they may not agree. But, it’s like…I honestly, really, truly wanna live by…this is our life.”

Last week, Certified Lover Boy topped the charts for the second straight week, earning 236,000 album-equivalent units this week. According to Billboard, Drake’s total has surpassed 849,000, closing on becoming platinum before the month’s end. The album opened at No. 1 a week ago with the year’s biggest week for an album, 613,000 units.

Do you think Lil Nas X and Montero will go No. 1?