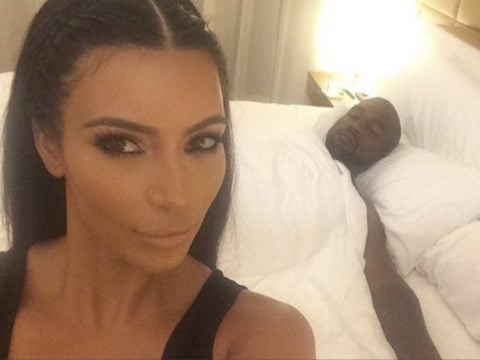 Grammy-winning rapper Kanye West and Kim Kardashian look like they’re staying put in the West. New reports claim KimYe are most likely not moving out to Chicago despite Yeezy’s recent suggestion.

According to Kim K’s camp, there are no plans to pack bags for Chi-Town.

“Kanye has a tendency though to change his mind quickly, so she is just going along with his plans because it makes him happy,” the source says. “Next week, something else might make him happier.” A second insider confirms, “He changes his mind like he changes his underwear.” Even if he does make the move, Kardashian West doesn’t plan to go with him. The reality star wants to continue to raise their three children North, 5, Saint, 2½, and Chicago, 9 months in Calabasas, California. (People)

A few days ago, Kanye raised eyebrows after announcing he would move back to the Chi.

Kanye made the announcement Monday at a Windy City event with Chance the Rapper, saying, “I gotta let y’all know that I’m moving back to Chicago and I’m never leaving again.” Sources close to Kanye say he and Kim have already found a home in Chi-Town and that’s where we know he wants to establish his permanent residence, but they are keeping all of their properties in L.A. (TMZ)

At the same event, Ye revealed he had a joint album in the works with Windy City native Chance The Rapper.

“Me and Chance working on a new album. It’s called Good A** Job. Now I love you guys very much and for it’s time for me to go to the studio.”

JUST SAW KANYE WEST. HE WORKING ON THAT NEW ALBUM

The post Kanye West & Kim Kardashian Might Not Permanently Move To Chicago After All appeared first on SOHH.com.