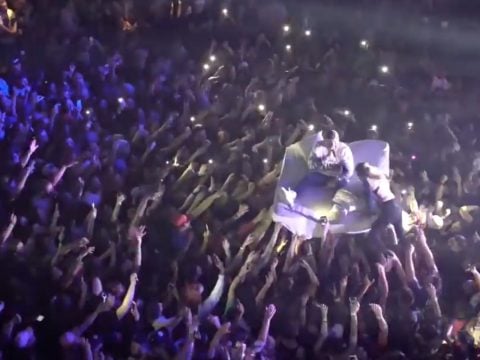 East Coast rapper Joyner Lucas has some diehard fans. The hip-hop artist has shared epic footage of himself getting nearly attacked by a concertgoer during a Boston concert.

Over the past few days, various hip-hop veterans like Ras Kass and Mysonne have dropped Lucas-targeted battle records.

“They asking me if you bashed Ras well why don’t we ask Joyner salute or a fast jab,” Ras raps. “No need to debate over missing the context wasn’t you dissing Lanez? Can’t play if the game’s over and Luke can’t train Yoda/I’m in Australia 19 hours ahead, came back from the future to tell you that you’re already dead/Sorry, you didn’t make it, killed ya self like Looper/Attack or Titan, I f*ck up some Oompa Loompas/Stupid as Super Troopers/I school shooter the groupers/I love the smoke, I got more flavors than hookah/Hate to ash my stogey in your plate or burn at the workplace/I’m just taking a smoke break/Warning shot, but even a flare gun is hot/Aimed at your left eyebrow ’cause that X marks the spot/Battling’s good for the culture/Plus it brings out your best/So the answer is yes/Challenge accepted” (“Smoke Break”)

GOOD MORNING AMERICA ….. @joynerlucas i told yo lil made in Tokyo looking ass not to fuck wit me

The post Joyner Lucas Bum-Rushed On Concert Bed During Sold-Out Show: “I Wanted To Kick Her Drunk A** Off That Mattress So Bad” appeared first on SOHH.com.