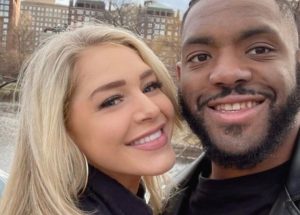 An OnlyFans model is being charged with the murder of her boyfriend.  Courtney Clenney, 26, who goes by the name Courtney Tailor on social media allegedly stabbed her boyfriend, Christian “Toby”  Obumseli, 27, in the chest and killed him after they’d gotten into an argument on April 3.

She had been in a rehab facility for substance abuse and post-trauamatic stress disorder in Hawaii since the attack but was arrested on Wednesday and is on her way back to Miami, Florida.  She’s being charged with second-degree murder with a deadly weapon. Hawaii Island police say she was arrested by U.S. Marshals on Wednesday around 9:30 a.m. and, as of last night, was being held at the Hilo cellblock.

Clenney’s attorney, Frank Prieto maintains that she acted in self defense after Obumseli allegedly attacked her and grabbed her throat.

“I’m completely shocked, especially since we were cooperating with the investigation and offered to voluntarily surrender her if she were charged,” Prieto said. “We look forward to clearing her name in court.”

The couple who met in Austin, Texas had been dating for less than two years, only moving to Miami earlier this year. Reportedly their relationship had been plagued by multiple reports of domestic violence that led to Clenney being arrested for domestic battery in Las Vegas. Their neighbors share that the relationship was volatile with multiple complaints made against the couple.

Prosecutors plan to reveal details of the investigation this afternoon. This story is still developing.