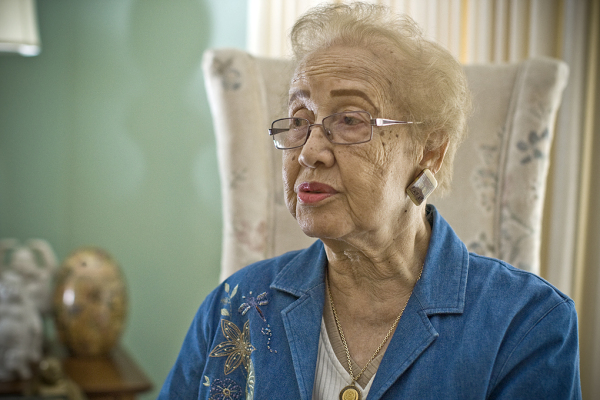 Katherine Johnson, a pioneering mathematician and NASA employee who helped usher in a new era of space travel, has died. Johnson was one of a trio of women that inspired the book and film Hidden Figures, and many on Twitter are gathered in honoring her contributions to science.

Johnson was born August 26, 1918 in West Sulphur Springs, W.V., and raised primarily in the town of Institute, which is the town that HBCU West Virginia State University is located. As a young girl, Johnson showed a talent for numbers and was strong overall academically, graduating from high school at 14. Johnson enrolled at West Virginia State University and graduated from college with degrees in French and mathematics. A professor, Dr. W.w. W.W. Schiefflin Claytor constructed an analytic geometry course tailored specifically for Johnson during her time in school.

After graduating from college at 18, Johnson became a schoolteacher at an all-Black school, and then later married her first husband, James Goble. The couple had three daughters, but the husband died in 1956 from a brain tumor. Johnson remarried in 1959 to James Johnson, a U.S. Army officer.

Johnson was selected by the National Advisory Committee for Aeronautics (NACA), the predecessor for the National Aeronautics and Space Administration (NASA) as a mathematician for its Guidance and Navigation Department in Hampton, Va. Johnson was part of a pool of women known as “computers” who all performed complex mathematical equations and projections that were used to aid calculations for space travel.

Hidden Figures was first a book from author Margot Lee Shetterly that depicted the lives of Johnson, Dorothy Vaughn, and Mary Jackson. In the film adaptation, Johnson is played by Taraji P. Henson. Octavia Spencer players the role of Vaughn, who became the first Black supervisor at NACA. Janelle Monae took on the role of Jackson, who was NASA’s first Black woman aerospace engineer.

Johnson’s equations were used to assist in the first manned American flight and also the Apollo 11 moon flight among other notable space missions. She worked with NASA until 1986 and has shared her extraordinary story with audiences as a speaker and expert. In 2015, President Barack Obama presented Johnson with the Presidential Medal of Freedom.

NASA has shared tributes to Johnson and listed her achievements via social media, sparking other publications and observers to share how Johnson’s story has inspired them. We’ve collected those reactions below.

We're saddened by the passing of celebrated #HiddenFigures mathematician Katherine Johnson. Today, we celebrate her 101 years of life and honor her legacy of excellence that broke down racial and social barriers: https://t.co/Tl3tsHAfYB pic.twitter.com/dGiGmEVvAW

Johnson was 101. May she rest powerfully in peace.