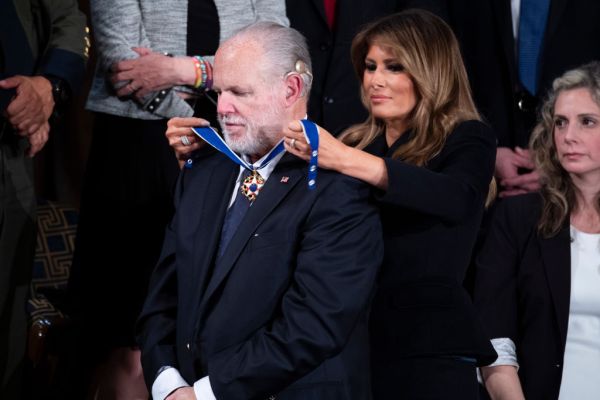 Among the many baffling moments of President Donald Trump’s State Of The Union address, conservative blowhard Rush Limbaugh being awarded the Presidential Medal of Freedom is among the highest.

Limbaugh, 69, has been beating the drum for the right via his wildly popular radio show, The Rush Limbaugh Show since 1988. As a result of the show’s wide reach, Limbaugh has been considered by many to be a weaponized voice for conservatives and many of his controversial takes have stoked the fires of dissent between liberals who view his brand of commentary divisive and flat out racist.

Trump’s wife, First Lady Melania Trump, placed the medal around Limbaugh’s neck as he was flanked by his wife. The honor is the highest awarded to a civilian, placing the radio host in the company with the likes of Rosa Parks, Martin Luther King, Jr., Michael Jordan, Sidney Poitier, and more.

Make no mistake about it, Limbaugh has made a career of being especially vicious with his commentary as it relates to people of color, especially Black Americans, and has aimed his bombast in the direction of anyone who dares to not share his and millions of listeners’ narrow view of politics.  Earlier this week, Limbaugh announced that he has been diagnosed with late-stage lung cancer thus the timing of the award has an air of suspicion hanging over it.

Online, most especially Twitter, many observers were taken aback Limbaugh receiving the honor considering he is partly responsible for some of the agitated energy and combative nature of conservatives and Republicans who propelled Trump into the hallowed halls of the White House. In so many words, Trump awarding Limbaugh the Medal of Freedom feels like nothing more than a ploy to keep his based on his side and further drive a wedge between the opposing sides despite his many failures a leader.

Limbaugh’s given the world plenty of fodder over the years that point to his not-so-thinly veiled racist ways. We’ve got some of those moments listed on the following pages.

Salute to Media Matters for keeping track of Limbaugh’s comments for the people.