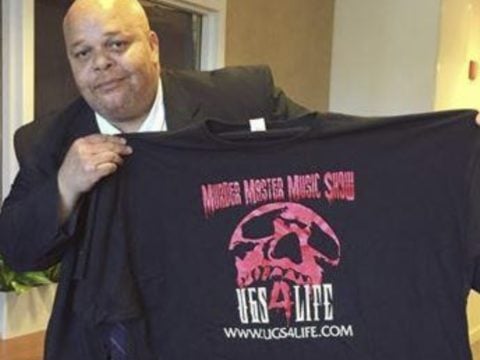 Murder Master Music Show’s close friend Collins “DJ Ready Red” Leysath passed away at the age of 53 on August 24th. He was not just a guest on the show, he was a fixture providing many classic moments during the show’s run. He co-hosted episodes, participated in classic Roundtable episodes, and called in to surprise other legends and pioneers.

We took pride in the fact that we told him directly while he was here how much he meant to the world of hip-hop. He was the first to sample Tony Montana and put him on a record, he gave the Geto Boys the sound they needed to show the hip-hop world that the South meant business, and he loved his fans.

Despite the majority of the “lamestream” media outlets not recognizing his influence and contributions, he always stayed upbeat and positive. Our thoughts go out to his family, friends, and fans across the globe! We love and miss you bruh! Long live the Musical Enforcer!

One night we had Bushwick on as a guest and I thought it would be a dope idea if Red called in. Red called and we captured Hip Hop history with the two Geto Boys catching up and sharing legendary memories with us and our audience.

A few months back we did a roundtable episode with DJ Ready Red, Sire Juke Box, and Prince Johnny C for the 30th Anniversary of the classic GB album Making Trouble. During this clip the 3 recall how they recorded an entire Geto Boys album in 1989 that never seen the light of day. Whoever is in possession of this, we need to hear it!

3. Discussing Secret Hip Hop meeting in 1990 with Rahiem of the Furious Five

For years there were speculations about a secret Hip Hop meeting in 1990 that took place where a variety of topics were discussed. On this episode, we were interviewing the legendary Rahiem of the Furious Five and both Red and Rahiem confirmed there was a meeting that went down and shared some insight about it.

Episode 100 of the Murder Master Music Show was amazing, to say the least. We had Freeway Ricky Ross, DJ Yella of NWA, Spice-1, Kokane, and MC Shan to name a few that called in. DJ Ready Red was not just a guest on this episode, he was the honorary Co-Host and stayed on the line for 3 hours with us taking calls from legends and pioneers.

Ready Red was the type of guy who loved people. He loved his fans, he loved Hip Hop and he was always outgoing and humble! One night we were interviewing the legendary MC Shan and Red decided to call into the show. He wanted to show support to an artist that he looked up to.