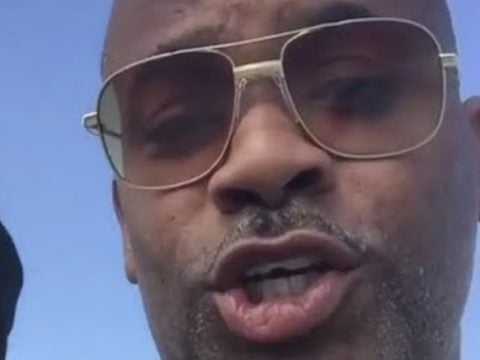 Music mogul Damon “Dame” Dash came “this” close to losing his California home. The hip-hop executive has announced his mansion survived a moving and deadly forest fire spreading throughout the state.

On Monday, Dame hit up Instagram to break the news to followers and revealed his neighbors lost their places.

Yesterday, rap stars Game and 50 Cent both reacted to the wildfires destroying homes.

Prayers continue to stay up.

This is insane. Prayers.

Over the weekend, Game penned an emotional letter about the fires destroying neighboring beach town Malibu.

Prayers up to everyone in California. Wow.

power out, barely any phone service, neighbors gone (my good white people be outta there boy)

fuckin phone on 8% & this shit headed straight for us. I can’t abandon the fort tho !!!! Gotta hold it down #RNS [BUT AYE, YOU KNOW I’M SMART & ALWAYS LOOK AT THE ENTIRE PICTURE…. LOWKEY GOT A FEELING THIS FIRE WAS STARTED BY SOMEONE OR SOMEONE(S) TO DIVERT ATTENTION FROM THE MASS SHOOTING IN THOUSAND OAKS 2 DAYS AGO] #STAYWOKE

Over the past few days, various celebrities have reacted to the fires.

I PLAYED HARVERD DROPOUT IN CALABASAS

Trying to get my mind off of this fire and snuggling with my niece. We are all safe and that’s all that matters

There is no reason for these massive, deadly and costly forest fires in California except that forest management is so poor. Billions of dollars are given each year, with so many lives lost, all because of gross mismanagement of the forests. Remedy now, or no more Fed payments!

The post Dame Dash Reveals Every House Burned Down But His In Cali Neighborhood: “A Miracle!” appeared first on SOHH.com.