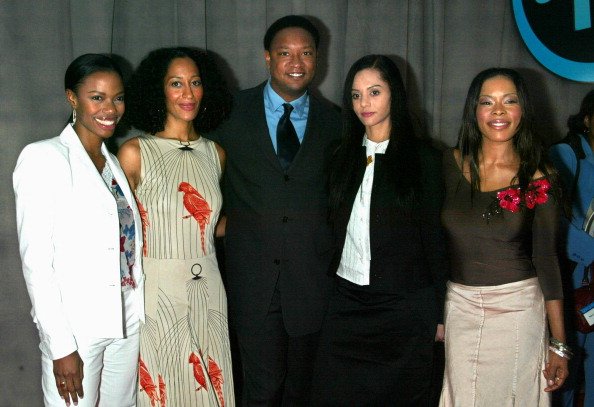 It’s no secret that Charlamagne Tha God is a huge fan of the hit show Girlfriends, so when the opportunity to interview the leading ladies, of course, he jumped on the chance.

While on the set of the “Cast from the Past” episode of Black-Ish, Charlamagne sat down with the iconic cast of the groundbreaking show Girlfriends (Tracee Ellis Ross, Golden Brooks, Jill Jones, and Persia White) to talk about the highly anticipated reunion, why Jill Marie left the show, and why there hasn’t been an official reunion of the show yet. In regards to the reunion, Ross revealed that when it comes to the deciding factor of syndication, the ladies have no say.

“People will literally come up to us and say, ‘why don’t you guys get on Netflix’,” Tracee Ellis Ross said, “But what they don’t realize is we literally have no power over that. We weren’t executive producers or showrunners, we were just actresses so we have no say in none of that.”

Jill Jones, who played “Toni” on the legendary show also cleared up rumors surrounding her departure from the show, revealing that she made the decision on her own for her career and not because of beef with any of her castmates as rumored in previous years.

“What people don’t realize is that ‘Girlfriends’ was my third audition,” Jill Jones said. “I landed the role when I was 25 and the show was on at the time for six years, putting me at 31-years old. So I made the decision to see what else is out there because I didn’t know how much longer things would last, so I chose to leave to strike while the iron was hot.”

The ladies also dished on the significance that their show had on Black women and the fight that the ultimately endured to ensure that their stories remained unique and real.

“Mara [Brock-Akil] played a huge part in bringing her vision to TV and she really listened to us when it came to how we wanted to portray our characters,” Tracee Ross continued. ” She really allowed us to add elements of ourselves to the characters which allowed us to be more authentic to who we are as Black women and stay true to our experiences with being Black women in America.”

In regards to whether fans will finally get the official reunion fans have been waiting for, the four ladies stated that the shows abrupt ending would make it difficult to reboot the show, but they would definitely sign on for a Girlfriends movie.