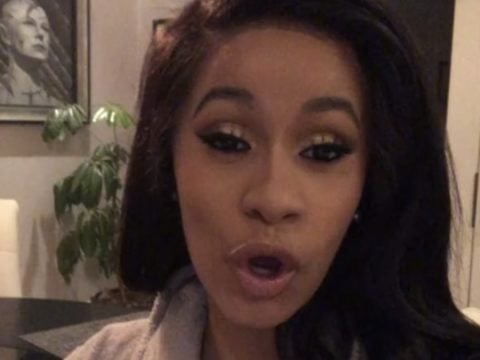 New York rapper Cardi B knows how to get under her enemies’ skin by simply doing nothing. New reports claim the two strip club bartenders she allegedly had attacked are legit upset over her no-show in a Manhattan courtroom.

According to reports, the victims’ lawyer spoke on their behalf and stressed the impact Cardi’s disappearance stirred.

Joe Tacopina tells TMZ … Cardi’s no-show in court Monday was blatantly defiant and disrespectful, and he believes she’s getting special treatment because she’s a celeb. He says his clients, Jade and Baddie Gi, are “very angry” about the images TMZ posted Monday … of Cardi twerking in tiger body paint while shooting a music video. Tacopina adds, “She decided not to show up for court because it was more important to take photos in a bikini in Miami. If any other defendant did that there would be a warrant issued for their arrest immediately.” (TMZ)

No wonder Cardi B couldn't make it to her court hearing Monday in NYC … she's hosting a WILD-ASS twerk fest down in Miami. #tmz #cardib #miami #twerk

This is SOOO CRAZY YALL!!!

yall know how much I love @nickiminaj

thank you babe for having us you killed this shit

A few weeks ago, Cardi found herself in handcuffs and hit with multiple charges in connection to an August strip club fight.

Police at the 109th Precinct in Queens charged the “Invasion of Privacy” rapper with assault and reckless endangerment, according to the New York Police Department. She received a desk appearance ticket, meaning she was released and will be ordered to appear before authorities at a later date. The charges stem from an Aug. 29 incident at the Angels Strip Club in Queens. According to an NYPD spokesman, Cardi B threw a chair that hit an “unintended target.” (Washington Post)

On a recent Queen Radio broadcast, Nicki Minaj exploded on Cardi and accused her of having the two strip club employees attacked.