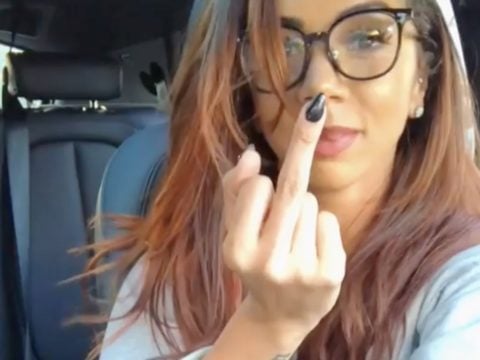 Vixen Brittany Renner is starting to feel the backlash. The hip-hop model has hit up social media to respond to fans and haters alike getting on her following public revelations about sexual flints with ex-boyfriend Lil Uzi Vert and NFL free agent Colin Kaepernick.

This past weekend, Brittany hit up Instagram to let her emotions explode by giving the middle finger to people saying “she’s this, oh she’s that.”

Who wants to get flown out? I’m buying flights

Last week, Renner released explicit footage of herself leaving a message to Uzi Vert about cheating.

Instagram model and sometimes comedian, Brittany Renner, has released a new book, Judge This Cover, and is dishing out the details on some of her sexcapades with celebrity men. Earlier this week, an excerpt from Renner’s book revealed that she slept with Colin Kaepernick several years ago. The then NFL star told Renner that he needed to gauge her true intentions and in order to do so, she would have to pay for her own flight to see him. (the Jasmine BRAND)

For the past year I have been dedicated to bringing this vision to life. It feels like I’m finally giving birth to my baby

From late nights writing at my Aunt @cowboy88cin’s kitchen table to my first book now available to purchase exclusively on AMAZON, this process has been absolutely magical and transformative. For a long time I could only see the disappointments, overlooking the lessons. Therapy changed my life and quite frankly is the only reason I was able to reflect and write this. You will find more answers turning the mirror on yourself than you will pointing a finger. To everyone who has continuously supported me every step of the way on this fine journey, I THANK YOU. I don’t come from a rich family and never liked men enough to be reliant on one…I simply invested my own money I saved up to fund a dream so you damn right I did this MY way!!!!!!! I believe you can be whatever you want to be in this life and that includes being beautiful and smart. Lastly, don’t you ever in your life underestimate me because THERE WILL NEVER BE ANOTHER!!! Link in my bio