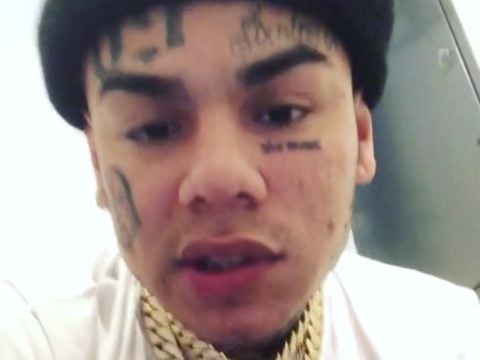 New York rapper Tekashi 6ix9ine didn’t lie when he claimed his former team jacked him for a grip. New reports claim 6ix9ine’s ex-management really stole millions of dollars from him.

According to reports, Tek’s now-distanced affiliates kept over $2 million from him with behind the scenes touring deals.

Tekashi 6ix9ine is spending Thanksgiving behind bars as both an accused criminal and a crime victim said by police to have been fleeced of $2.2 million by his own manager. The rapper’s manager, Kifano “Shotti” Jordan, is also behind bars, having been indicted along with Tekashi and four associates as members of the 9 Trey Gangsta Bloods. The five of them are charged with racketeering and violent crimes involving firearms. Each faces a minimum of 32 years in prison, a maximum of life. (The Daily Beast)

Prior to landing behind bars, 6ix9ine revealed his ex-squad hid concert money from him.

Last week, 6ix9ine announced his decision to cut ties with his entire team and nixed a nationwide tour.

“What’s up everybody? I’m letting everybody know that I cancelled my whole tour. The American dates is not happening. It’s not going down. Austin, Texas, I think I was supposed to be there today. I’m not going to there. I spoke to the promoters – we are going to be in business. I am going to be in Austin, Texas. I fired everybody in my team. I’ve got no manager, no booking agent, no PR, no publicist, I don’t got nobody on my team. It’s just me. I want everybody to know if you’re booking shows, do not book shows unless I say ‘this’ show is going to be booked with this person. They will steal your money, they’re not me, I’m not signing no f*cking contracts that don’t got nothing to do with me. Whoever is doing shows for Tekashi 6ix9ine is stealing your f*cking money. So if you need shows, I will let people know I’m doing shows or if you not on the phone with me, do not book that show because it is not me. I fired everybody. I don’t give a f*ck who you used to see me with. They’re no longer around. It’s a f**king dub. November 23 the album drops.”