According to 50 Cent’s recent Instagram posts, Xfinity dropped the STARZ network from all their bundles and package deals. Therefore, anyone who has those cable service providers will not be able to watch Power this weekend (legally).

He launched a full-blown social media campaign urging viewers to contact the cable services to keep the network.

Fifty doubled down on his claims and said the show isn’t coming on this week because Comcast dropped his show.

“So is Power coming on tonight????” One Instagram user asked. “No,” the mogul responded firmly. 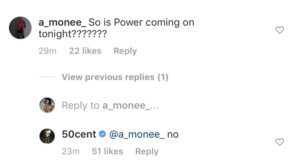 We’ll have to wait a couple of hours to see if this week’s episode of the hit series will be skipped. But reports suggest that the abrupt decision is a result of failed negotiations between STARZ and Xfinity.

“Lionsgate-owned Starz has delivered another shot across the bow in its ongoing talks with Comcast, warning millions of Xfinity customers that they could lose access to the premium network on December 10. Comcast is the No. 1 U.S. cable operator, with most of its 21 million-plus subscribers coming via the Xfinity service. In a statement, Starz said it “has been working diligently to reach a fair market distribution agreement with Comcast.” The statement added, “months before our contract deadline and in spite of our best efforts to engage in meaningful discussions, Comcast has publicly stated their intention to drop our networks from all packages and bundles.” (Deadline)

The post 50 Cent Claims This Week’s Episode of ‘Power’ is Cancelled Because Xfinity Dropped STARZ appeared first on The Source.